Argentina prepared for next Sunday's World Cup quarter-final against France or Ireland by scoring nine tries in an comfortable Pool C win over Namibia.

Namibia bow out of their fifth World Cup without a win. 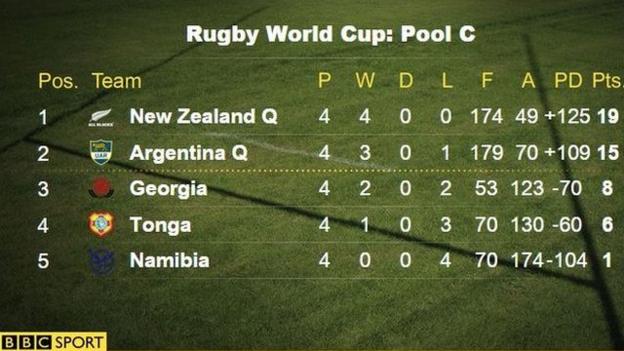 Can Argentina surprise the heavyweights?

On this evidence, neither France nor Ireland will fancy facing the Pumas at the Millennium Stadium next weekend.

Argentina's youngest World Cup starting XV for 16 years showed adventure and were creative as their youthful exuberance shone through.

They showed no mercy as they demolished Namibia, who had secured their first ever World Cup point in their previous outing, with free-flowing and adventurous play.

Argentina secured a bonus point four minutes before half time before adding a further five tries, including three in the space of 10 second half minutes.

This was not Daniel Hourcade's strongest side, the head coach likely to recall his influential and experienced players for next weekend, yet they still managed to score more points against Namibia than world champions New Zealand managed last month.

Namibia struggled to cope with Argentina's pace and Lucas Gonzalez Amorosino almost scored one of the tries of the tournament after a great turn of speed before eventually being stopped.

Argentina football legend Diego Maradona, who danced in the changing room following last week's defeat of Tonga, said he will return if the Pumas make the semi-finals.

Based on this performance, Ireland or France will have their work cut out to prevent that.

Argentina captain Martin Landajo: "We knew we had to play well against Namibia and we did that, even though there were mistakes.

"Now we can think about the quarter-finals, though I can honestly say I don't care if we play Ireland or France. We will see who we get."

Namibia captain Rohan Kitshoff: "We were exposed a bit, it's not the way we wanted to leave the World Cup, but we showed a lot of heart until the end." 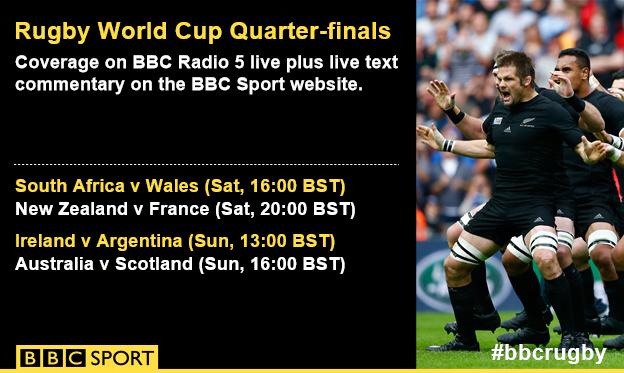