Australia legend David Campese has expressed his disbelief Wales were unable to score a try when the Wallabies were down to 13 men their 15-6 World Cup win at Twickenham.

Scrum-half Will Genia and lock Dean Mumm were sin-binned amid second-half Welsh pressure in the Pool A decider.

Wales opted to bid for tries instead of kicking goals, but failed.

"We were two men down and all you try to do is punch it up.

"I mean you had space galore - use the ball. Where's the Welsh flair that we've seen?

"I know we're going back in history, but that was your game."

"The opportunities were there… it's about putting the ball into space and running.

"Now you had so much space there, but you just wanted to punch it up.

Campese said coach Michael Cheika had "brought Australia together" since succeeding Ewen McKenzie by ensuring they enjoy "a bit of fun" away from the field of play. 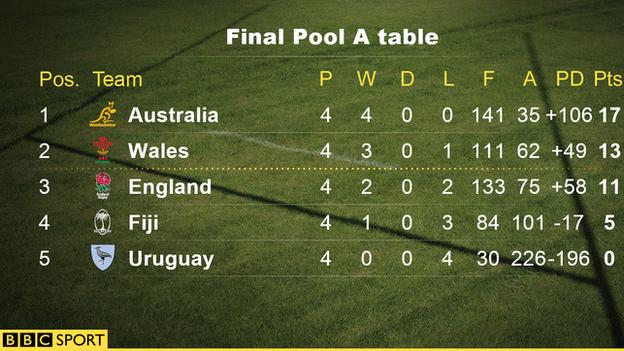 "And when you enjoy your rugby, you actually die for each other and you saw that defence, really, what they did is they didn't give up," former wing Campese told BBC Radio Wales.

However, he believes Wales can beat the Springboks in Saturday's quarter-final at Twickenham if they display patience in attack.

"You play a similar game [to South Africa], but you've got to really think about where you're going to put your players - you're losing players, unfortunately, left right and centre," said 101-times capped Campese.

"The game is about the ball. Don't give them the ball.

"It's simple, if you haven't got it, you can't score, but people forget about that in rugby.

"Every time you kick it away, you're actually relieving the pressure [on the opposition].

"So what you've got to do next week is actually be patient… it might take 40 phases.

"Who cares, score the try. Don't panic, you can't go anywhere and they can't do anything.

He added: "You've actually got to back yourself, have the confidence and when you get down there, you're in the red zone, just get some points."