Ireland coach Joe Schmidt fears that Paul O'Connell's international career may be over after his captain was forced off with a serious-looking leg injury in the 24-9 victory over France.

"It doesn't look great with Paul. It looks like an upper hamstring but we will probably have to wait until Monday to give it a scan," said Schmidt.

Fly-half Johnny Sexton is also set for a scan on a groin strain.

Peter O'Mahony suffered a suspected knee injury but is less of a concern.

Lock O'Connell, 35, is leaving international rugby and joining Toulon after the World Cup - having won 108 caps.

In addition to the injury worries for next Sunday's quarter-final against Argentina in Cardiff, flanker Sean O'Brien could face a citing for an alleged punch on Pascal Pape.

Sexton, who landed two early penalties, was the first of the trio to leave after 25 minutes following a hefty hit from Louis Picamoles.

O'Connell left on a stretcher off at half-time and then O'Mahony departed in the second half.

"It's probably Paul that worries me most of the three," observed Schmidt.

"With Johnny, it looks like an adductor to me, but it's not the learned eye of a medic. So we are probably going to get him scanned tomorrow.

"He's already talking about next week. I'm not sure whether that means he'll be playing. He's never short of advice.

"O'Mahony didn't seem too bad, we are hopeful. I think it's a twisted ankle or knee. He was walking pretty well in the changing room and hopefully he'll be OK."

Number eight Jamie Heaslip, part of a formidable Irish back-row, said the team had crucially not panicked after the injuries.

"At half-time, it was actually quite a calm changing room. Everyone just kind of switched into their role and adapted a bit to the solutions, who was fitting in where and how we were going to proceed," Heaslip said.

"All the guys who stepped in put in a massive amount of work." 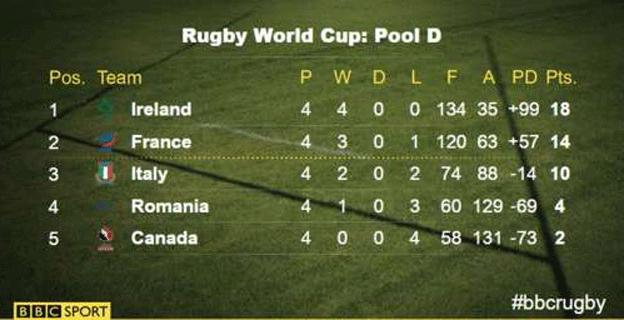 Ian Madigan came on for Sexton and directed the Irish team well, kicking two penalties and converting Conor Murray's try after Rob Kearney had crossed for the first on 50 minutes.

"You're always delighted when a young guy comes through the system," Schmidt said.

"One thing that helped Ian was the quality of the go-forward ball that Jamie and the pack offered him. It got him on the front foot and made his job a little bit easier.

"There are a lot of sore bodies in that changing room. The lads were just physically and emotionally drained at the end of it and from this point on that is what you've got to give when you get the chance to wear that jersey."