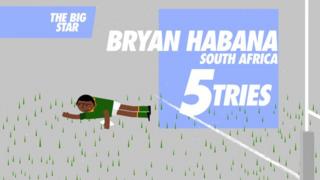 BBC Sport present the all the key statistics from the pool stages of the Rugby World Cup, which saw England become the first hosts to be eliminated before the knockout stage.

The tournament's leading try scorer is South Africa wing Bryan Habana, with Argentina racking up the most points.