A Rugby World Cup record 2.4m tickets have already been sold for the tournament - filling 97% of the seats on offer - and all four quarter-final matches are expected to be sell-outs despite the absence of eliminated hosts England.

In fact, England's elimination has increased the availability of tickets for Wales v South Africa and Scotland v Australia - the two quarter-finals that could have featured Stuart Lancaster's side - with fans selling them on at near face value rather than watch their rivals' matches.

In addition to those packing out the 74,000-capacity Millennium Stadium and 81,000-seater Twickenham Stadium, thousands more will watch the action from fan zones in Cardiff and Richmond as well as in Exeter, Newham and Rugby, with millions watching on television. 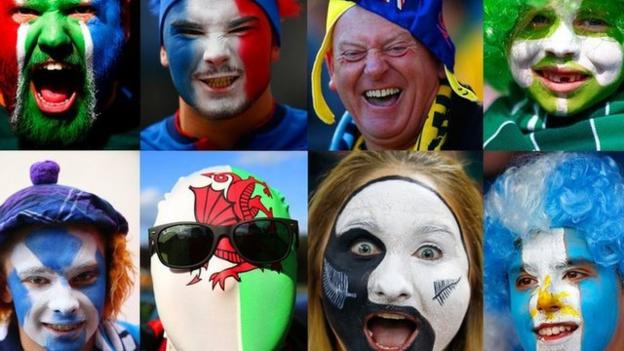 Wales may have taken pleasure from contributing to hosts England's pool-stage exit with a 28-25 win at Twickenham a fortnight ago, but their own defeat to Australia means they are in what is - according to the World Rugby rankings - the tougher side of the World Cup draw.

If the rankings play out as they suggest they will, Wales will have to overcome a formidable southern-hemisphere trio to claim their first World Cup, with possible matches against the All Blacks and Australia lying in wait if they beat the Springboks this weekend.

Warren Gatland has said his injury-hit team are motivated by the pain of 2011, when they lost to France in the semi-finals after Sam Warburton was sent off.

"We came away from 2011 feeling a little bit unfulfilled," said the New Zealander. "I don't think we're ready to go home on Sunday and I know the players aren't ready to go home."

Gatland's side are backed by Prince William (the Vice Royal Patron of the Welsh Rugby Union) - in contrast to his England-supporting brother Prince Harry - and the Duke of Cambridge followed in the footsteps of legendary singer Sir Tom Jones by presenting them with their match jerseys during the pool stages.

New Zealand face up to ghosts of past

New Zealand beat France four years ago to secure their first World Cup triumph in 24 years, but it is the spectre of two painful upsets on British soil that hangs over their last-eight meeting.

Jonah Lomu, Jeff Wilson, Andrew Mehrtens and Josh Kronfeld were part of the All Blacks side that led 24-10 against Les Bleus in the 1999 semi-final at Twickenham, but were swept away 43-31 amid a surge of attacking flair.

Eight years ago, at the Millennium Stadium, the France team went nose-to-nose with the All Blacks' haka and backed up their pre-match antics with a sensational 20-18 win over the tournament favourites.

France coach Philippe Saint-Andre has urged his scrum-half Morgan Parra to spark a revolution among Les Bleus' forwards. "If we want to beat New Zealand, we will have to play the French way," he said. "We're getting ready for a massive battle."

Ireland fans descended on Cardiff for their Pool D decider against France last weekend, with estimates suggesting they out-numbered their Gallic counterparts nine to one in the Millennium Stadium.

It will take deep pockets for fans to be back in the Welsh capital to see if Joe Schmidt's side can make history this weekend.

Hotel prices in Cardiff for the night before Ireland's 13:00 BST meeting with Argentina have risen 960% on their monthly average, with a double room priced at an average of £1,225 according to online search site Trivago.

Those Ireland fans who stay at home to watch the action will be in good company. Coverage of their win over France in their Pool D decider was the programme of choice for 72% of those watching television in the Republic of Ireland last Sunday.

Ireland will be without their inspirational leader Paul O'Connell, whose international career was ended by a hamstring tear sustained during their victory over France.

The Irish are also without two of their first-choice back row, with Peter O'Mahony joining O'Connell in exiting the tournament, while Sean O'Brien is suspended for the Argentina game. Jordi Murphy and Chris Henry come into the side, while fly-half Johnny Sexton is fit to start despite limping off with a groin problem against France.

Scotland lost all five of their matches to finish bottom of the Six Nations table earlier this year, but Vern Cotter's side beat Japan, United States and Samoa to secure their quarter-final berth.

They also have the magic of JK Rowling on their side. Before Scotland's crucial final pool game against Samoa, the Harry Potter author told fans on Twitter she would reveal the birthday of character Sirius Black if they sent the team messages of support.

Their team edged to a narrow victory over the Pacific Islanders, buoyed by the virtual support on social media and the sound of bagpipes that were smuggled into St James' Park despite a tournament ban.

Should they upset favourites Australia, it would be Scotland's first appearance in the last four of the tournament since 1991.

And Cotter is using the words of former Manchester United manager Sir Alex Ferguson to inspire his team.

Centre Richie Vernon has revealed Cotter has shown the squad a speech by the most successful football boss in British history in which he says high-pressure matches can only be won by 'playing the game, not the occasion'.

The Scots have been forced into changes for the Australia match, however, with influential forwards Ross Ford and Jonny Gray suspended. Fraser Brown and Tim Swinson will start instead, while flanker Blair Cowan and centre Peter Horne also come into the side.