In his 2015 Rugby World Cup column for the BBC Scrum V website, former Wales captain and back-row Colin Charvis assesses the task facing Wales in their quarter-final against South Africa.

Among his thoughts are:

There's no argument about it, the 15 players plus the replacements need to have the games of their lives this weekend for Wales. Whether you've previously been in good form or not at your best, or whether you are new to the squad or have 100 caps, only your best will do.

Warren Gatland has reverted back to what he probably considers his strongest set of forwards to take on South Africa at Twickenham on Saturday.

Dan Lydiate brings a bit of bulk into the back-row and retaining Luke Charteris does likewise at lock, while Gethin Jenkins brings experience to the front row.

Alun Wyn Jones is set to win his 100th cap and over the past four or five years he has been magnificent.

We couldn't wish to have a better man locking the Wales scrum - and you would suspect that most of the southern hemisphere teams, the French and the English would have him in their teams. 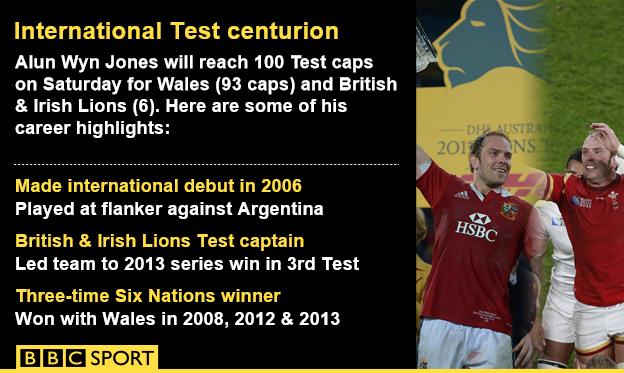 Alun is now more frequently producing man-of-the-match displays, performances that made him a series-winning Lion and mean he is handed the captaincy when Sam Warburton isn't around.

With the backs, I'm wrestling with two things in my mind: "Have I seen Tyler Morgan play a lot of games at outside centre and have I seen Gareth Anscombe play enough international rugby at full-back?"

You've got to back the coaches, though, because if these are the players Warren is starting with, he's obviously got confidence in them. He must think these are the guys that can get Wales to another semi-final.

I don't think any of them are shy of the challenge, it's just how quickly they can form a team - because some of them we haven't seen play together.

It's almost as though Warren has rolled up his sleeves and said: "We are where we are boys. It's not easy, it's not ideal, but we've still got a World Cup to win."

Lydiate back battered but unbowed

When it comes to 'chop tackling', Dan Lydiate is probably the strongest guy we've got in the squad at stopping players.

If you remember when we beat South Africa a year ago, that was the key to the game. The forwards really fronted up that day and stopped those South Africans from getting their juggernaut moving forward.

That's what Dan will bring. But he's also a very, very talented guy, and there are other aspects to his game too. Most of it we don't see... he does the 'unsung hero' work.

He's had a plate inserted in his eye socket following the injury he suffered in the win over Fiji, but I can't imagine the injury will be in the back of Dan's mind.

Probably the worst injury I had was a clash of heads with [former England forward] Tim Rodber that left me with six cracks in my face.

When you first go back to training you're quite worried about it, but the medical staff are very clever and know if your face - or wherever the injury is - is strong enough.

Gone are the days of opposition players singling you out and giving you a bit of special treatment for an injury.

Nowadays, players are so focused on doing their jobs... and they also now have to be mindful of the citing system.

So I think Dan will feel fine. He'll want to get out there and he'll want to prove a point.

I know there are people saying Alex Cuthbert has not quite hit top form on the wing, but we can't forget he's been a good servant for a few years.

Would you rather Alex at 85-90% of what he has been or someone raw and untested?

Wales are depleted, we are down to bare bones, but this is a guy who knows the structures, knows the way the team plays, and knows a lot about that squad and the way it works.

I still believe he'll do a job for Wales... as South Africa aren't a team that try to exploit players.

If we were playing New Zealand, for example, they'd be kicking grubbers near him, testing him with high balls, turning him around and attacking him from different angles.

What we've learned to expect from South Africa is a frontal assault, but Cuthbert is a big old fella and if he fronts up and defends well, gets the ball in hand and keeps the ball alive, he can still do a good job for Wales.

A Hook in reserve to snag the Boks?

James Hook, who is on the bench on Saturday, is like the cat with nine lives! Every time we think he's gone, forgotten about, he just reappears.

When we had that bout of injuries during the pre-World Cup matches, I remember saying on Scrum V it was the 'bring back Hooky' campaign.

None of us have as much insight as Warren and his team, because we are not the ones sat under that immense pressure week-in, week-out.

But with Hooky, one thing he can bring is experience off the bench. He is a steadying figure. You've got to remember he's played in Grand Slam-winning teams.

They've got a few guys on that bench that can hopefully slot in and bring in a mature head... these guys will have an impact on Wales.

If Wales are going to go and win the next three games in a row against some incredible opposition, we'll need all of them.

We all know it's not going to be easy, but Wales have beaten the Springboks last year - and before that we pushed them all the way in South Africa.

Already in this tournament, Wales have surprised a rugby audience that was expecting England to beat us... and while Australia may have beaten us, they didn't score a try.

If Wales perform to a man the best they possibly can, it's very difficult for any team to beat them.

They can look at the chinks in the South Africa armour. Their coach Heyneke Meyer initially went for experience but now he has to rely on youth in the important centre and lock positions.

They started the tournament with an ageing squad but they then lost their captain Jean de Villiers and now Victor Matfield has been sidelined with a hamstring injury.

I'm not saying that squad is in turmoil but if you can work them hard... then I think there's an opportunity.

They may have lost to Japan and shown a few frailties, but they came through every other game since then with a lot of confidence.

It is clearly a very, very strong team - but it is beatable.

South Africa has been very stagnant in terms of playing the same kind of rugby for a very long time, and we have got a hungry dog chasing after them.