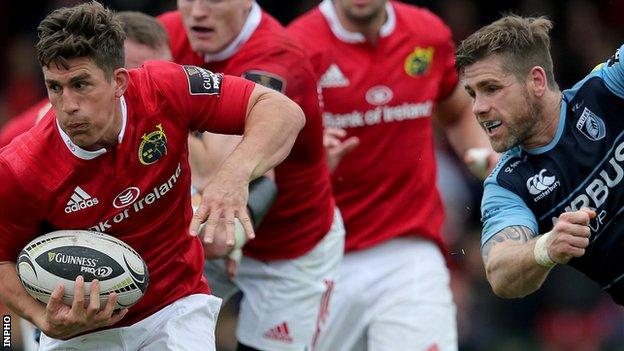 Munster moved to the top of the Pro12 by beating Cardiff Blues to make it four wins our of four this season.

Munster outscored the visitors 14-3 over the closing 20 minutes with the Blues ending the game without the sin-binned Jevon Groves.

The strong finish by the hosts denied the visitors only their second away victory in the Pro12 since last September.

Fly-half Rhys Patchell opened the scoring with a penalty from inside the 22 for the Blues. Their first try soon followed when Garyn Smith passed inside to Patchell and scrum-half Knoyle was up in support to finish under the posts. Patchell's conversion made it 10-0.

Munster hit back with a try of their own inside four minutes. With space out wide, Francis Saili's superb looping pass took three out defenders and sent hooker Sherry over in the left corner.

Keatley added the extras and as Munster remained on the front foot, the fly-half took advantage of Gavin Evans' missed tackle to glide in behind the posts.

However, in the final play of the first half, the Blues profited from some lacklustre Munster defending to work winger Richard Smith over out wide on the left, with Patchell converting with aplomb from the touchline.

Munster's poor tackling was again exposed when Sherry and Jack O'Donoghue failed to stop Isaacs from five metres out. Patchell converted the centre's 43rd-minute try to make it 24-14.

The introduction of Tomas O'Leary following his three-year spell with London Irish, coupled with a textbook maul try from Sherry, saw Munster go up a gear.

They drove the Blues off their own scrum five metres out, and replacement flanker Coghlan dived on the loose ball for his first Pro12 try which Keatley converted.

A Patchell three-pointer closed the gap to 28-27, but Saili's deft pass unlocked the Blues defence out wide for the increasingly influential Conway to go over.

Groves was binned for a no-arms tackle in the build-up, and Keatley's touchline conversion took a deserved bonus point away from the luckless Blues.