You can tell it as a magnificent rearguard action against the odds. You can remember it as collective red-shirted heroism, as another heart-breaker of a near-miss, as a litany of what-ifs and agonising what-might-have-beens.

After Wales' 23-19 defeat by South Africa in the World Cup quarter-finals all those would be true. But they are trumped by a greater truth: who wants to be the ill-fated losers once again?

Four years ago, Wales lost a semi-final by a single point despite playing most of the match a man down. Here, having lost nine players to injury before and during the tournament, they lost to a single late score, having against the odds led both at half-time and with 10 minutes to go.

There will be an exhausted pride in the remarkable effort put in - 189 tackles made to the Springboks' 101. Dan Lydiate with 21 of his own in just 67 minutes, Sam Warburton and Taulupe Faletau with 17 apiece, Alun Wyn Jones 15, Luke Charteris 14 and Jamie Roberts 12.

At times it almost matched the Wallabies' famous 13-man defence of a week ago. The dam creaked but it would not break. For a period early in the second half this broad red line absorbed a series of assaults from the big guns of the South African back row that would have breached almost any other.

And they almost made it, inspired by the ghosts of those team-mates already fallen rather than haunted by the absence of so much experience and strength.

Yet it ends the same way, brave but beaten. And when the eulogies and hangovers have passed, another truth will emerge: this was a fair result, no matter how close, no matter how painful.

There were the costly errors - two big overlaps blown in the first 15 minutes to leave tries begging that a more polished and ruthless team would have taken, the decision of Alex Cuthbert to come off his wing and join Lloyd Williams in tackling Duane Vermeulen off a South African scrum with five minutes to go and thus leave the space for Fourie du Preez to hare away for the critical score.

Then there were the little mistakes, the ones that sapped momentum or cost precious territory in a contest so close you had to grab on to every tiny opportunity that came your way: losing an attacking line-out on the Springbok 22 in the first half; Gareth Anscombe opting for an ill-conceived grubber on 60 minutes with Wales making yards and creating space; setting up possession deep in enemy territory with 10 minutes to go and the lead one point but opting not to work a drop-goal chance.

Injuries were a handicap

Four years ago Wales trudged away from the World Cup wondering what might have been had Warburton not been red-carded, or if Leigh Halfpenny's late penalty had two more metres of legs on it, or Stephen Jones's straightforward conversion of Mike Phillips's try not hit the post.

There are a few choice ones this time too: if it had been a back rather than prop Gethin Jenkins attempting the long miss-pass that would have put Tyler Morgan away for a certain try in the first few minutes; if Faletau had clung onto the ball as he burrowed across the Australian try-line a week ago rather than spilled it with an inch to go; if Halfpenny, and Jonathan Davies, and Scott Williams, and Rhys Webb and all the rest of their casualties had instead made it through to the defining hour.

But there is a difference. In that 2011 semi-final against France, Wales really should have won. They had 59% of possession and 60% territory, landed just one kick from seven and had to make less than half as many tackles as Les Bleus.

This time the stats spin a different story. This time it was the opposition who had 59% of possession. It was Wales who had to make almost twice as many tackles, Wales who gave away 12 penalties and Wales who could be grateful that the opposition's kicker, in this case Handre Pollard, missed two makeable penalties and one straightforward conversion. 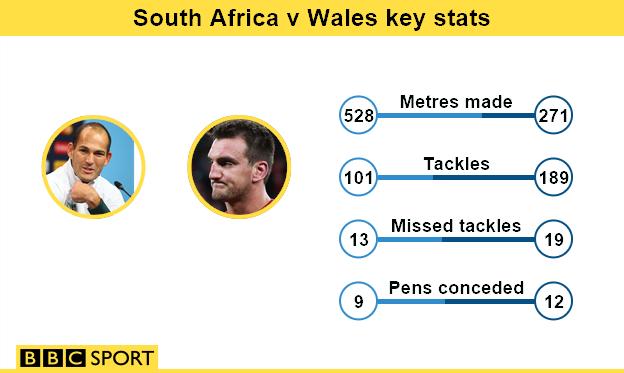 South Africa displayed flaws of their own. For all the thumping and thundering of their ball carriers - the balding old warhorse Schalk Burger made an astonishing 26 carries, Vermeulen 84 metres with his 15, Lodewyk de Jager 14 of his own - they frequently lacked guile to go with the grunt.

Only occasionally - most tellingly of all with Vermeulen's sweet off-load round his back to fox Williams and Cuthbert and set Du Preez free - did they pull off the subtle or surprising.

And it cannot be called a surprise. Wales' campaign may have been equally lost with the failure to score in those seven minutes against the 13-man Wallabies seven days before, but they have now lost 17 of their last 18 Tests against South Africa. That cannot be glorious, not when it keeps happening.

Where to find comfort? The last time Wales' World Cup ended like this, it was followed the next spring by a Grand Slam. Maybe that's for the future. But who isn't tempted to live in the future when the present is as painful as this?