So then there were four. This weekend's World Cup semi-finals bring together the four best teams in the world, and given their form so far, we should be in for a feast of rugby.

I hope it stays dry at Twickenham because all four teams play with great continuity, so unless the weather intervenes, I don't think we will get into a stalemate. Both should be fantastic games.

It is very humble of Springboks coach Heyneke Meyer to say this All Blacks is the best side ever. Statistically you'd be hard pressed to say it's not. They have played 52 matches since the last World Cup and won 47, only losing three. They are an absolutely awesome team.

The banter between the coaches makes for a nice spirit going into the game, but once that whistle goes, it will be an explosion of rugby, absolutely unbelievable in its intensity.

People say it could be a very tight game, but with two teams of contrasting styles, I anticipate there will be tries - at least four overall - unless the weather comes into play (rain is forecast for late afternoon on Saturday).

You have got one team that is confrontational, and predominantly defensive, in its approach and one that is very efficient in all departments.

What New Zealand will not have had too much of is an opposition team really contesting the breakdown with them, and even dominating it. The very few games they have lost in the last four years have been when the opposition have dominated that area, as Australia showed in the Rugby Championship earlier this year. Like any good team, they struggle if they can't get the quick ball they require.

In Duane Vermeulen, Francois Louw and Schalk Burger, the Springboks have got three tearaways who will absolutely terrorise the breakdown. Not only that, but in second rows Lood de Jager - arguably the best lock in the competition - and Eben Etzebeth, they have other big ball-carriers who are conspicuous in all the rucks and mauls.

The All Blacks back-row trio of Richie McCaw, Kieran Read and Jerome Kaino may have a marginal edge in experience, but in terms of physicality and brains at the breakdown, it is incredibly equal. And if you look at the front five forwards in both teams, I'd say the Boks have the edge there in physicality and aggression.

If the Boks win the breakdown, they win the game. If they dominate there, they force the opposition to kick more, and the only way they could lose in that situation is if they are not clever with their kick-returns. But Bryan Habana is brilliant defensively, his fellow wing JP Pietersen is not going to do anything silly and full-back Willie le Roux is decent under the high ball.

Win the breakdown, kick smartly and return New Zealand's kicks well and South Africa are in with one hell of a chance.

But, for me, this All Blacks side is the smartest rugby team. They are definitely the best in the rugby brain department, and this is where they have the edge. They appear to have the answer for most predicaments. Whatever the Boks throw at them, they will have an answer.

One to watch - Nehe Milner-Skudder 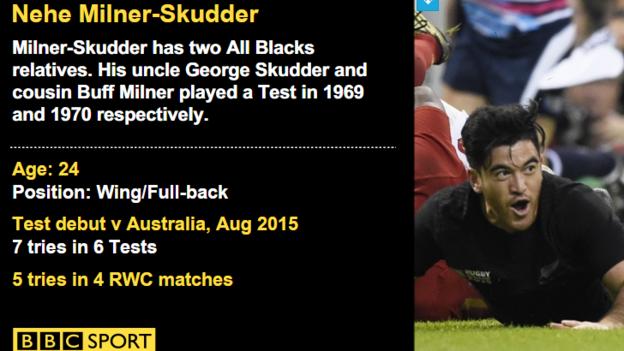 You can't predict what this guy is going to do, and that is almost impossible to defend against. When you think you have got him, he escapes because of that acceleration and wicked step.

He is just exceptional in tight spaces, and lethal in open spaces. He makes things happen when he has got the ball, in the same way full-back Ben Smith does - he doesn't 'die' with the ball, he is always alive to what's possible.

When you co-ordinate that with the brains and speed of Aaron Smith at nine, the experience and brain of Dan Carter at 10, the thrust and experience of Ma'a Nonu and Conrad Smith at centre, and the running-back brutality of Julian Savea, you have almost got the complete backline. It is just phenomenal.

South Africa's backline includes one of the top try-scorers of all time in Habana (64 Test tries), and a good running full-back in Le Roux, who has got an educated left boot and is a good footballer.

Their midfield of Handre Pollard (21), Damian de Allende (23) and Jesse Kriel (21) have had some success against New Zealand in their young careers.

But when it comes to the heat of the battle, you need clear minds. You don't want them frustrated. There is no doubt that having been in those situations many times, New Zealand's trio have an advantage.

But sometimes you can't halt youthful enthusiasm. When I was young, there was nothing that was going to stop me, and even when it did, you got up and did it again. You have no fear, you just want to impose yourself on the opposition. That is what Pollard and his midfield mates will be doing for 80 minutes.

The Pumas have realised through the increased competition of the Rugby Championship that they can beat these 'big three' southern hemisphere teams.

They have taken it upon themselves to change their old forward-dominated style and realised that if they don't try to play rugby and score some tries, what chance have they got to win?

The Pumas are a big, strong side. In players like prop Ramiro Herrera, lock Tomas Lavanini and flanker Pablo Matera they have young men bristling with confrontation, with older guys like Agustin Creevy and Juan Martin Fernandez Lobbe equally fired up. There is a brutality about the way they run hard with the ball and win the collisions, getting quick ball and getting rid of it to their dynamic backs.

The fliers on the flanks, Juan Imhoff and Santiago Cordero, have run in some impressive tries and, inside them, they have the experience of Juan Martin Hernandez.

We have not seen 'El Mago' (The Magician) do anything unbelievable, but he is doing the right things well, whether it is a relieving kick down field or a 20-metre pass to his left or right to put someone else into space.

The Pumas are on fire, playing with no inhibition and massive ambition. One classic example was Imhoff's first try in the quarter-final against Ireland. The execution was so simple and so efficient, it was brilliant, with beautiful passing and quick running, combined with great skill.

In the Rugby Championship, Argentina used to drop off with 15 minutes to go. But we haven't seen that in this tournament. A lot of these guys are playing first-class rugby now and they are fit for purpose.

The only way I can see them falling away is if the emotion takes over. When I saw them lined up for the anthems before the Ireland match, and the tears were flowing from every player, I thought they had lost it before the kick-off. They are an emotional nation but they are also smart, and they delivered.

But if the Pumas are one of the sensations of this World Cup, what a revelation the Wallabies pack has been. For years they looked lightweight up front but now they are scoring tries from rolling mauls.

So Argentina are going to find it hard against a formidable Aussie pack, with David Pocock back to play a key role in the breakdown battle. Australia may have conceded a few unusual tries against Scotland but up to that point their defensive line has been absolutely superb. They have only conceded five tries, while Argentina have conceded nine.

So we are going to find out what brain power the Pumas have got to get through the Wallabies defence. The tries they have scored so far suggest they will find a way while, for me, the Aussies have been a bit formulaic in their patterns.

They look to manipulate a defence and get into position to create quick ball, and then go to the flanks to score. But I don't think they are going to find it that easy against Argentina.

On form you'd go for the Pumas to win, but history says Australia. They are able to just do what it takes to win a game. They carved England apart in the pool stages, but needed body, mind and soul coming together to beat Wales, and got out of a hole against Scotland when they should have been clear after scoring five tries.

I would expect New Zealand and Australia to be in the final. But if it goes the other way, I wouldn't be surprised.