Two days, two semi-finals, nothing at all in common between them except that it was impossible to look away for a second.

If New Zealand's slog past South Africa was a street-fight, Australia's escape from Argentina was dancing in those same streets - rugby as a celebration, sport as an adventure to be lived and relished rather than the sensible execution of a risk-averse strategy.

A match that ends with a 14-point winning margin and the victors outscoring the vanquished four tries to none sounds like a stroll. Instead it felt like a flat-out sprint from start to finish.

Argentina used to be the George Graham's Arsenal of international rugby: lots of big lumps, lots of long balls, wins snatched through penalties.

They took pride in it because sometimes it worked. A nation without a single professional club and a national side starved of regular competition could not be expected to take the big boys on with ambition and flair and grand designs. 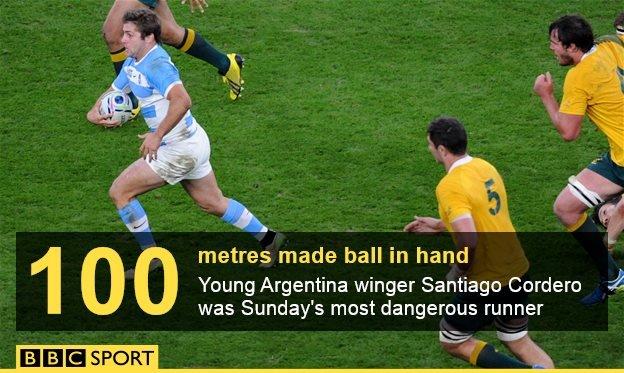 Except now, with Rugby Championship experience for the Pumas and a Super Rugby team lined up for next season, they have. Much of their play was imprecise. There were mistakes everywhere. They didn't care.

World Cup semi-finals are not meant to be played like this - 33 defenders beaten, 13 clean breaks; 174 passes, 12 offloads.

A few months ago Santiago Cordero was his side's fifth-choice winger at best. His autumn was supposed to involve a trip to the Pan American Games to play Sevens. Instead, aged 21, he lit up Twickenham as he has illuminated the tournament: 100 metres made with ball in hand, six defenders beaten, three clean breaks and plenty more clean pairs of heels.

They still went down. Australia are into next weekend's World Cup final on merit, having escaped the Group of Death with pulse still pumping and wriggled free of Scotland's surprise strangulation when many thought they were gone, and with every victory they show a little more.

In the opening exchanges came the stiletto: two chances, two tries taken, two conversions added. When another breach opened up, with Argentina controversially down to 14 men, they struck again.

Then came the bludgeon. In their epic defence against Wales in the pivotal group game here three weeks ago, when they held firm under a red-shirted onslaught with 13 men for seven minutes, the Wallabies made a total of 84 tackles.

On Sunday night they made 142. Argentina kept coming, through the heavy tanks up front and the explosive runners out wide, from deep, at pace, when it was on, when it was not. 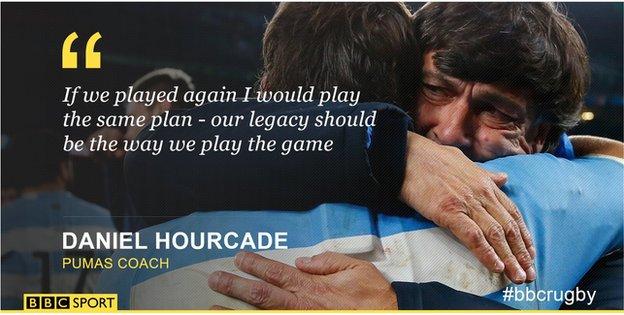 When the Pumas went down they were often out. Turnover followed turnover. Pocock, relentlessly building a watertight case for being the most influential player of this World Cup as well as its most likeable, produced four, Fardy and Douglas two more apiece.

It won them the match, just as it detonated England's plodding assault last month, just as it may yet upset New Zealand's hopes of being the first team to ever retain the Webb Ellis Cup.

What can you do about Pocock and his relentless cohorts when the game is like this? With team-mate Hooper at seven he becomes the Pooper scooper, digging the ball out of opposition hands, coming up smelling of roses no matter who is refereeing and how marginal some of it might look.

Argentina might have cause to privately bemoan some of the calls of Sunday's official Wayne Barnes, less for those breakdown decisions than the bigger ones: Tomas Lavanini's sin-binning for not using his arms in a tackle when Israel Folau's side-step took his left out of proceedings and as his right was attempting to adjust, Kuridrani staying on after deliberately kicking the ball away from an attacking Puma ruck and Will Genia tackling his man without retreating from a penalty, just as he had to draw that yellow against Wales. 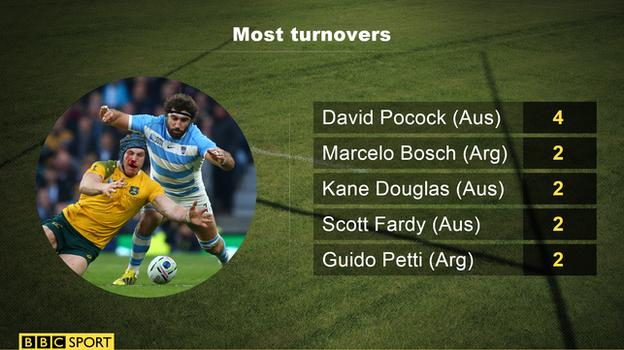 They might also point to the loss of three critical players - captain Agustin Creevy, playmaker Juan Martin Hernandez and star winger Juan Imhoff - to untimely injury, leaving them to play the final 20 minutes without a single man left on the bench.

They will also realise that what really cost them was a lack of ruthlessness as stark as the Wallabies' own cold-hearted composure.

The chances came but the points did not: when Cordero cut through just before half-time only for Hernandez to mangle an offload with Joaquin Tuculet free outside him; in three minutes of intense pressure around the 50-minute mark, deep in the Aussie 22, that ended with a knock-on; in the inability to exploit a huge overlap down the left on 63 minutes; in knocking on again when a converted try would have brought them level with 11 minutes still to go.

Too many of their wounds were self-inflicted. Fly-half Nicolas Sanchez may use his right boot with the dreamy skill of Seve's short irons but the inside pass that Rob Simmons picked off with just 67 seconds gone was as speculative as a Ballesteros tee-shot.

Scrum-half Martin Landajo did brilliantly to gather Bernard Foley's kick ahead, but his knock-on after tapping his own mark led directly to the Wallaby scrum that triggered Adam Ashley-Cooper's first try.

"If we played again I would play the same plan," said Argentina coach Daniel Hourcade afterwards. "Our legacy should be the way we play the game."

You can only salute that approach, just as we should also savour the remarkable revolution that his opposite number Michael Cheika has orchestrated in these past 12 months.

A year ago, when Cheika was given the job two days before a tour of the northern hemisphere that saw the Wallabies lose three games in four, his side looked the least likely of the big three to survive the group stages.

Now, with a team buttressed by the returning stalwarts Matt Giteau and Drew Mitchell, and burnished by the extraordinary Pocock, they are heading into a final that could be the most thrilling contest yet in a tournament awash with them.

Never before have Australia and New Zealand met in a World Cup final. Seldom have the best two sides in a World Cup come together in the last embrace.

There is so much to relish: Pocock v McCaw, Carter's last hurrah on the grandest stage of all, the world's best young winger in Julian Savea against its most experienced in Ashley-Cooper, Cheika coming against Steve Hansen, two unsmiling geniuses of the coaching playbook.

All Black magic against the gold standard. It is the crescendo this World Cup deserves.