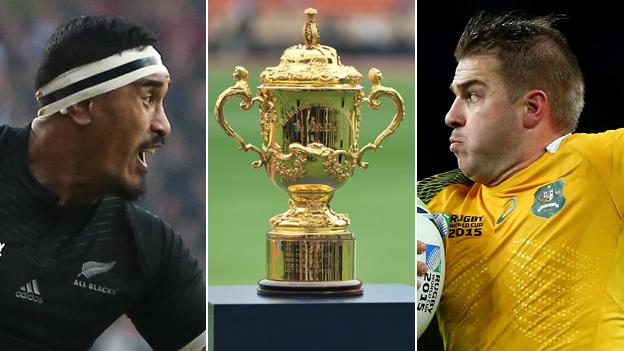 The All Blacks showed their big-game belief to fight past South Africa and move within one more win of an unprecedented defence of their crown.

And the Wallabies set up a first World Cup final between the Antipodean rivals after holding off a late Argentina onslaught.

But where were the thrilling semi-finals won and lost?

'All Blacks happy to win ugly'

Things have changed for this All Blacks team. They are different from some of their predecessors - they are happy to win ugly.

That is still the preferred mode of this All Blacks side. We saw them in their pomp in the quarter-final victory over France.

But they were never going to be allowed to play that way against a South Africa side that would contest the breakdown so ferociously and are very disciplined in defence.

When they were 12-7 down at half-time, and not being allowed to play the way they wanted to, other sides might have panicked.

Instead New Zealand cut down on the number of penalties that they were giving away - strangling the supply of points from the boot of Handre Pollard - and concentrated on getting out of their half and dominating the territory in the wet conditions and played very pragmatically.

The fact that Dan Carter kicked only his seventh drop-goal in 111 Tests shows how they were concentrated on building the scoreboard and doing enough to win.

And they punished South Africa's mistakes when they came. Wing JP Pietersen should have stayed out to cover Beauden Barrett, but instead his moment of indecision as he thought about coming inside to guard against Ma'a Nonu was punished with New Zealand's second try.

New Zealand's second try summed up the knife-edge that South Africa were playing on.

You don't have to score tries to win matches, but if you don't then you have very little margin for error - you need to be pretty much faultless in every other department.

The Boks made mistakes when it mattered. As well as Pietersen's defensive error, there was Eben Etzebeth going off his feet to give away a penalty that Carter kicked to restore a five-point gap at 20-15. That came just a couple of minutes after Pollard had cut the lead to 17-15.

The Boks played too many phases in their own half, did not get their biggest, most destructive ball-carriers into the game - the likes of Schalk Burger, Bismarck du Plessis and Etzebeth - and kicked poorly out of hand.

I thought that the heavy rain at Twickenham might play into their hands. However, just because you are playing a less expansive game, your execution still needs to be spot on.

The conditions put a premium on skills and that played into the All Blacks' hands.

Australia should have been out of sight in the second semi-final - scoring four tries to none - but their intensity and tempo dropped alarmingly at times and they could not leave Argentina behind.

After they allowed Scotland back into the game in the quarter-finals, it is the second match in a row where they have had a big period of down-time.

They won't admit to it but subconsciously I think that they switched off because they thought they had the game sealed already.

When you score that many more tries against any team you should be over the horizon and away. If not, it is because you are slackening off.

The Wallabies defence has been praised, but their first-up tackling was not good enough. Too often their scramble defence got them off the hook, snuffing out the Argentina breaks before the Pumas support could get there to convert half-chances into tries.

However their win did show Australia's strength in depth.

Their big-game players shone. Adam Ashley-Cooper's hat-trick was an obvious highlight, but his second and third tries were set up by Matt Giteau and Drew Mitchell - two guys who have come into the team since the Australian Rugby Union relaxed their rules on overseas players.

Behind those first-choice players though the Australia bench added something and helped belatedly seal the match.

Kurtley Beale and Matt Toomua are both players who relish the broken field opportunities that appear later in matches. Replacement scrum-half Nick Phipps provided the pass for Mitchell's late break and ex-Exeter captain Dean Mumm stiffened up the forward pack. 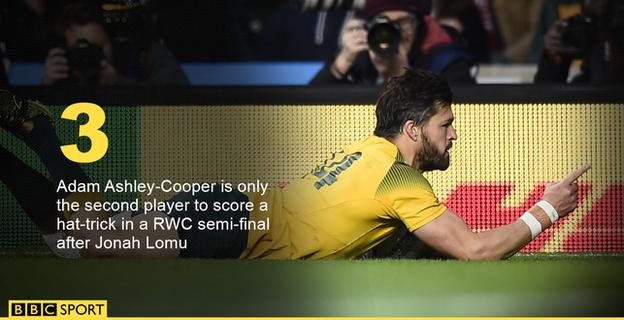 Tears, but no fears from Argentina

You could see how much the defeat by Australia hurt Argentina when coach Daniel Hourcade finished the match in tears.

They will be disappointed because they will feel that they had a chance of winning, as they have every right to.

So far for them this tournament has gone their way. That is not to say they have been lucky - they have worked hard to make that happen.

But every now and again you have games where things do not work out. Wing Santiago Cordero fumbled a few passes and Juan Martin Hernandez failed to find Joaquin Tuculet with an offload with the line beckoning on the stroke of half-time.

They needed something to stick for them to bring victory within sight and it never quite did.

I hope their tears will turn to smiles when they reflect on how far they have gone in this tournament and how they have established themselves in the world game.