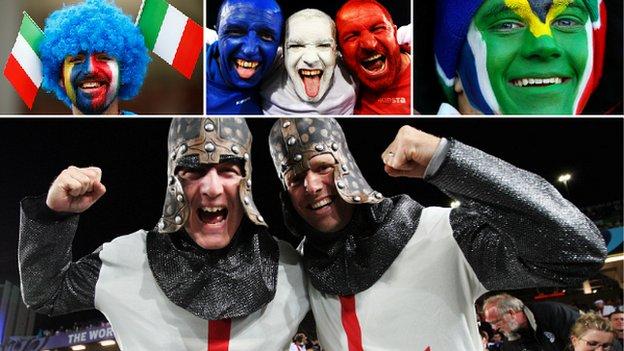 Ask rugby's most powerful figure where the 2015 World Cup will rank and he sees no reason to be diplomatic.

"The biggest and the best of all time" Brett Gosper tells me confidently, at the plush Kensington hotel where the sport's leading administrators have set up camp ahead of the climax to the game's showpiece event.

Certainly, World Rugby's chief executive has plenty of reasons to be pleased - and not just because the country of his birth, Australia - will contest this weekend's final against arch-rivals New Zealand.

Commercially, rugby's eighth World Cup has taken the sport to new heights; never before have as many as 2.4 million tickets been sold for the event, (97% of all those available), with a world-record attendance of 89,000 at Wembley for Ireland's match against Romania. With half a million overseas fans, 1.5 million visitors to fan zones, and unprecedented global TV audiences, the event has generated a profit of £160m.

"That is great news for the game, globally" Gosper told the BBC.

"The World Cup is our financial engine, responsible for 85% of our revenues. That money will be spent on grass-roots rugby and on training, helping the sport to become more competitive."

With the governing body already committed to investing £350m between 2009 and 2016, the hope will be that at arguably the most exciting time in the sport's history, the main legacy of England 2015 will be to continue rugby's unprecedented recent growth in popularity, with 7.2 million players now worldwide, (double the number playing six years ago) and provide a springboard for 2016, with rugby sevens' debut on the Olympic programme in Rio.

And yet, it could have been even bigger. Despite Japan's defining and miraculous win over South Africa, along with several other thrilling contests, including both semi-finals, this World Cup will also be remembered for perhaps one of English sport's greatest ever calamities; the national team becoming the first hosts ever to be eliminated at the group stage of the competition.

None of the home nations made the semi-finals, and collectively, this failure will have affected domestic TV audiences, pub sales, advertising revenue, and the return on investment for sponsors. Some experts even suggested England's departure could cost the economy £3.5bn thanks to negative investor sentiment, but Gosper is adamant that as far as the rest of the world was concerned, it simply did not matter.

"In a global sense, nothing's been lost, the momentum continued. Here of course, a little bit of the froth at the top of the beer may have been a bit calmer, and when the hosts do well you always get that added bit of excitement, but generally, the juggernaut rolled on."

Certainly as a shop-window for the sport, the last six weeks seem to have been a game-changer in new markets. In the Netherlands, for instance, the World Cup was shown live on TV for the first time and reports suggest club membership has increased 16% this autumn. Digital reach too has been impressive, England 2015 the most discussed sports event of the year on social media.

"Social media figures have been well beyond even the London Olympics in terms of engagement" says Gosper.

But beyond popularity, there were concerns over accessibility and inclusion. With more than half of all official tickets for the World Cup costing more than £100, the third-biggest sports event in the world was also the most expensive in history, with some seats for this weekend's final available on secondary ticket websites for an astronomical £60,000.

Some would have liked to see more than six matches in the north of England, and there was criticism of the transport operation, with long queues and crowded trains, especially in Cardiff, but overall the event underlined Britain's growing reputation as a first-rate host of global sports events.

Estimates suggest the tournament generated £1bn for the UK economy, and although England's early exit is being seen as a huge missed opportunity for the game to grow beyond its traditional southern heartland, the sport looks set to benefit in other ways. The World Cup is expected to mean a profit of £15m for the RFU, enabling it to continue investing in a grassroots legacy programme that began in 2012, and which was designed to capitalise on a once in a lifetime chance.

The RFU, under fire for another dismal England campaign and the make-up of the review panel established to work out what went wrong, is quick to point out that already:

One can only guess at what might have been achieved had England stayed in their own competition for more than 16 days, especially in the north, where the sense is that most people's attention has quickly returned to football and rugby league, but Steve Grainger, the RFU's Development Director, remains positive.

"I think the key thing is hundreds of thousands, if not millions of people have been exposed to rugby who may not have been before. Down the line it could lead to more people playing rugby.

"If by 2019 we don't have more membership at clubs and more children playing in schools we'll be saying it won't have worked. But I'll expect more people to be playing rugby.

"When you get to the back end of the tournament and the games are more sparse there is an impact. If we had gone out in the pool in a competition in Australia it would have been a lot worse. I've seen more kids throwing rugby balls around than I've ever seen before."

England 2015 was not without its controversies. Many were concerned by the number of serious injuries, and the standard of refereeing - including the use of the TMO - was questioned, culminating in Craig Joubert's decisive mistake which so cruelly cost Scotland the win of their lives in their remarkable quarter-final against Australia.

Gosper admits that Joubert's bizarre run from the pitch at the final whistle "wasn't a great look for rugby", but he stands by the South African - as well as the other officials. He also maintains that the rate of injuries has been no worse than previously seen.

Despite such reassurances, this eighth Rugby World Cup looks set to force the game's rulers to look hard at the use of replays, player welfare, and the development of the tier two nations, most of which - although becoming more competitive - still have a long way to go before they can challenge their more established rivals.

But in the years to come, England's World Cup looks set to be remembered as a huge boost to the game, even if it forever holds painful memories for its hosts.