Defending champions New Zealand have named an unchanged side for Saturday's World Cup final against Australia.

Dan Carter, the all-time leading points scorer in Test history, starts at 10 having missed New Zealand's triumph in the 2011 final because of injury.

"We knew we would have to earn the right to progress so being in the final is very satisfying in its own right," said head coach Steve Hansen.

"But the ultimate goal has always been to win it."

New Zealand's matchday squad of 23 has a combined 1,339 caps, with five of the players set to play their final matches for the All Blacks.

Captain Richie McCaw is expected to call time on his record-breaking Test career after the game, although he insisted he has yet to make a decision on his future.

"I've purposely not gone into that because I wanted to make sure I do this and not get all hung up on what could be and what might be. This tournament I was keen to turn up here as though I was going to play games to come," he said.

"I have to make a decision when I get home. It's something down the track - I just want to play on Saturday the best I can.

"You still do the same things as though you are going to play for years to come, not think this is the last time."

Carter, centres Ma'a Nonu and Conrad Smith, and replacement hooker Keven Mealamu have already confirmed that the World Cup final will be their last international.

Nonu and Smith will extend their Test-record centre partnership to 62 matches, with Sonny Bill Williams once again starting on the bench, while winger Nehe Milner-Skudder will win only his eighth cap.

New Zealand are bidding to become the first team to retain the Webb Ellis Cup, but Hansen insisted: "We came here as contenders for the Cup, just like everyone else. In our minds, we have never been defenders of the trophy.

"We've had a great preparation so far this week - the boys are feeling really fresh and energised. We're building towards Saturday's match with a growing sense of determination and real excitement, and I couldn't be happier with where we are at." 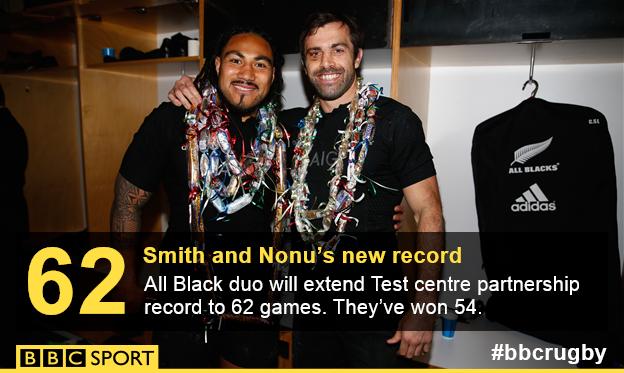