And then it was all over.

Forty-eight matches, 271 tries, admirable ultimate champions and a host of brilliant memories from arguably the best Rugby World Cup ever.

As the dust settles on New Zealand's win over Australia in Saturday's finale, I have been casting my mind back to remember the highs and lows of six weeks of often-scintillating rugby.

Player of the tournament

The Australia number eight had a huge impact, making a massive contribution in every game he played in.

He made crucial turnovers against the best teams - and back rows - in the world. They knew he would be coming but still could not limit his brilliance.

Try of the tournament

This try was beautifully constructed and thrillingly executed.

From a breakdown in the middle of the pitch, Foley suckered the England defence into believing the Wallabies were attacking down the left, before doubling back, bringing Kurtley Beale with him to form a dangerous attacking arrowhead with Israel Folau on the outside.

England scrum-half Ben Youngs was isolated and exposed in the guard position and Foley left him rooted to the Twickenham turf with a simple inside pop to Beale, continuing his run to take the return pass and coast unopposed to the try line in a delicious move.

Match of the tournament

The final was a tremendous battle between two top teams whose individual stars pushed themselves to their limits.

Australia's comeback - recovering from 18 points down shortly after half-time to be within just four of the All Blacks with 15 minutes to go - was the drama the match needed to make it great.

However the best team in the world ruthlessly finished off the Wallabies with fly-half Dan Carter running the show in his final match for his country.

New Zealand play the game in a style that looks enjoyable to be part of.

From the sidelines it is certainly pleasing to my eye. They are deserving world champions.

Moment of the tournament

It has been a long time since I have shouted at the television screen, but I could not believe what I was witnessing as Japan beat the two-time champions to win their first World Cup match in 24 years.

It was a truly inspirational rugby moment and Japan's decision to go for victory rather than take the kick that would have drawn the match when awarded that late penalty was sensational.

Breakthrough player of the tournament

The New Zealand wing only made his international debut in August but just seven matches and less than three months later, he scored a try in the World Cup final.

He is full of snap, crackle and pop, able to beat defenders in a tight space with a huge side-step and rapid acceleration.

He made more metres (561m) and clean breaks (15) than any other player at the World Cup and scored six tries.

His skill set is also sufficiently extensive to allow him to play full-back because he is confident under the high ball and has a solid kicking game. 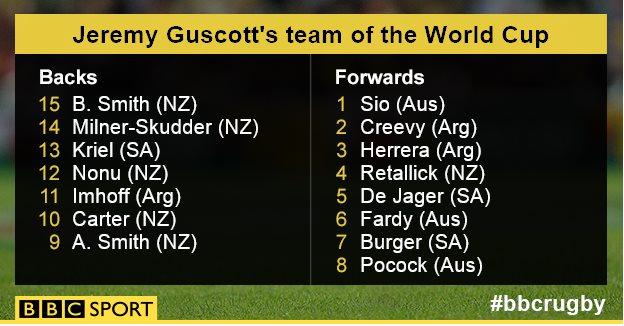 Surprise package of the tournament

Vern Cotter's team got within 45 seconds of making the semi-final before falling to an agonising late and, as it turned out, erroneous penalty call against Australia in the last eight.

I had not given them much of a chance before the game. I thought they would do well to stay within 10 points of Australia.

It will not feel like any great consolation but they did themselves and everyone involved with the Scottish rugby team proud.

It was a fantastic performance after finishing bottom of the 2015 Six Nations table.

The underachievers of the tournament

It has to be hosts England

England were 22-12 up with less than half an hour to go against Wales in their Pool A meeting but 'lost' the closing stages of the match 16-3 to find themselves on the wrong end of a 28-25 scoreline at the final whistle.

A team in form would not have let that lead slide.

It was a real shame for all the guys who had worked hard for three months building up to the tournament that they could not find their best form when it counted most.

Coach of the tournament

Argentina's head coach was promoted to the job in autumn 2013 after a spell in charge of the country's second-string side and has had a huge impact over the two years he has been in place.

The team he had inherited had recently lost 73-13 against South Africa, but he has motivated and inspired them to play fearless running rugby and their progress to the semi-finals showed their more expansive game is paying off.