Burgess was part of the England squad which went out of their home World Cup in the group stages.

He switched codes to join Bath last year but will now head back to Australia to play for NRL side the Rabbitohs, his former club.

A transfer fee has been agreed with South Sydney and Bath are expected to confirm his departure on Friday.

He was given time off by Bath coach Mike Ford after England's disastrous World Cup campaign and has now played his last game of rugby union. 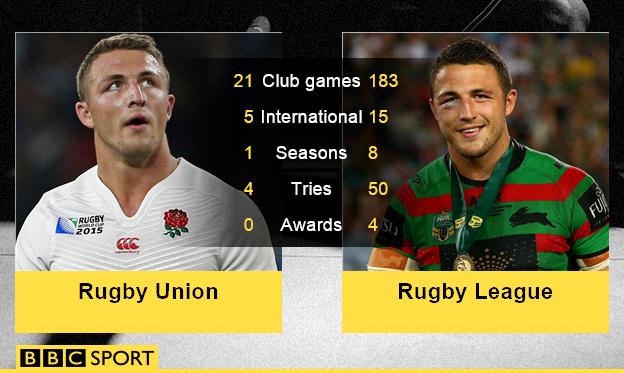 Burgess, who had been playing at blind-side flanker for his club, was picked at centre for the hosts against Wales in the World Cup and his selection sparked much debate.

Bath had been adamant he would be staying at the club, with owner Bruce Craig saying on Wednesday: "As far as we're concerned he's with us and will continue playing for us." Craig also said there had been no bids for the former Bradford Bulls player.

Those sentiments were echoed by head coach Mike Ford, who had said the player would honour his Bath contract, and that he expected him to be part of England's 2016 Six Nations campaign.

Instead Burgess will go back to Australia and join brothers George and Tom, who signed three-year contract extensions at the Rabbitohs last week, and Luke, who plays for Manly Warringah Sea Eagles.

BBC Radio 5 live's Alastair Eykyn says his departure is a huge loss for the sport.

"There is no doubt he had the tools to become a fantastic player in rugby union, but now we will never know," he added.

Burgess, from Dewsbury in West Yorkshire, played 21 games for Bath after joining them just over a year ago, scoring four tries. They paid Australian side the Rabbitohs about £270,000 (Aus$500,000) for the player.

Having made his England debut in August, he was selected for the World Cup ahead of the likes of Northampton centre Luther Burrell, who looked to have established himself in the team after playing in all five of their Six Nations matches earlier in the year.

Burgess impressed as a replacement in England's opening World Cup win over Fiji and started the defeat by Wales in the second pool game before being replaced with 11 minutes left.

He came off the bench for the last 15 minutes of the subsequent loss to Australia and was then dropped from the squad for the final game against Uruguay.

Listen to the 5 live podcast on Burgess' departure.