Wales have gloried in Six Nations titles including two Grand Slams under Warren Gatland and were arguably Europe's best team at the 2015 World Cup.

But the frightening fact for the four Welsh regions is that just one team has managed to make it through to the knock-out stages of the main European competition in the last five years - that was Cardiff Blues back in 2012. So, just before launch weekend, what are the prospects of that improving?

On the eve of European competition starting for the Welsh teams, three experts give their views, including Wales centurion Martyn Williams, who missed an historic kick for European glory in 2009. 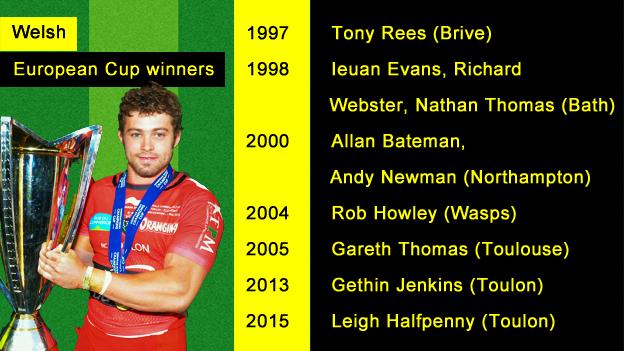 Scarlets and Ospreys get their European Champions Cup campaign under way this weekend, and will hope to reach at least the last eight.

Newport Gwent Dragons and Cardiff Blues will start their bids in the second-tier European Challenge Cup.

The form Welsh team so far has been the Scarlets with six wins from their first seven Pro12 games. They kick off with a visit to Northampton Saints (Saturday, 19:45 GMT) and it may not be the worst time to go to Franklin's Gardens - usually a formidable place.

The Saints have just one win in the first four rounds of the Aviva Premiership and a win would doubtless strengthen the Scarlets' "come home George North" campaign.

Racing 92 are in fine form in the French Top 14 but as always their commitment to Europe remains to be seen and the Scarlets have already won in Glasgow this season. So early promise may not just be looking through a rose-tinted monacle.

The last time the Ospreys reached a European quarter-final, in 2010, it was the third in a row but a one-point defeat to Biarritz heralded the end of the "Galacticos" era.

In recent years they have increasingly coped with the absence of a host of front-line players - but not this year, which has been their worst start to a season with just two wins in seven - both against Italian opposition.

The return of the big guns, Dan Biggar and Alun Wyn Jones in particular is key, and with two trips to France (to Bordeaux-Begles and current leaders Clermont) opening with a win at home to Exeter Chiefs (Sunday, 17:30 GMT), while no mean feat in itself, is absolutely crucial.

The Dragons, who host Sale on Sunday (15:15 GMT) also have two French trips in the Challenge Cup. But last year a win in Stade Francais, along with victory in Newcastle turned their season around as they reached the semi-final, knocking out neighbours the Blues along the way.

They have to reproduce the standards they set and the confidence they found last year, but worryingly their form hasn't been as good this year and they've been dealt some cruel injury blows behind the scrum with centres Tyler Morgan, Jack Dixon and utility back Hallam Amos missing.

The only ones with a worse start are the Blues languishing one from bottom with just one win against Zebre on the opening weekend of the Pro12. They'll be looking forward to starting the Challenge Cup against even weaker Italian opposition - Calvisano (Saturday, 14:00 GMT).

This is the Blues' big chance not just to kick off with a bang but to kick-start their whole season. Harlequins and Montpellier will be stern tests but the old Amlin Trophy which the Blues won in 2010 is long overdue a partner in the Arms Park trophy cabinet.

"I can't see a Welsh quarter-finalist. I'm sad to be negative," says Charvis.

"Our national team is easily the strongest in the northern hemisphere, but it doesn't translate down a level."

Charvis, who won 94 caps for Wales between 1996 and 2007, added: "We saw during the World Cup a lot of our players stepped in, played very, very well, but it's just not consistent throughout the whole squad.

"Sometimes you see with the Scarlets or when the Ospreys play, there's just one or two players that aren't quite what would be perhaps an A international or an international.

"And that is the difference. When you look at Exeter, for example, all of Exeter team is of A international/international standard.

"They are a very, very strong team and the Ospreys will have their hands full."

As for the likely winners, even at this stage, Toulon's star-studded squad gets Charvis' vote as they aim for a fourth successive title win.

"If you look at their starting XV, their second XV is just as strong.

They're going to be difficult to stop and to be in a group with them, you're obviously not going to back yourselves because of the talent they've got.

"Because most of them aren't French, they can win away from home; the players that they choose are all very long in the tooth, well-capped internationals that can still perform consistently.

"They're all coming in as the full, finished article just to slot into the team and that's very difficult to cope with."

If anyone should know what it might take for a Welsh team to succeed in Europe, it would be Martyn Williams.

Charvis' former Wales team-mate and rival missed a kick in a historic semi-final penalty shoot-out for Cardiff Blues against Leicester in 2009 that ended the Welsh team's hopes.

Williams also admitted it would be "incredibly tough" for Ospreys or Scarlets to reach the quarter-finals.

"Ospreys have got two trips to France (Clermont Auvergne and Bordeaux-Begles), where it's notoriously difficult to get an away win," said Williams.

"But we've got to be realistic and realise how under-resourced they are in the main competition in Europe and anything's a bonus.

"If one of them get through, it's a huge achievement."

On an upbeat note, Williams is urging Dragons and Blues to "go for it" amid the traditional uncertainty over whether France's entrants will take the Challenge Cup seriously.

"I just think both those regions need any good luck story or any feel-good around the squad they can," said Williams.

"So you never know how the other teams in the group see it.

"The French could put their veterans or under-19s out."

Dragons were knocked out in the 2014-15 semi-finals by Edinburgh and that example leaves Williams feeling a successful run in Europe's second tier is achievable for both Welsh teams.