Offering big money to tempt stars such as George North and Leigh Halfpenny back to Wales may not be fair to other players, says Welsh Rugby Union chairman Gareth Davies.

Davies says there is a "finite pot of money" available to sign players on national dual contracts.

Halfpenny is at Toulon and North with Northampton while 17 players have signed dual deals in Wales.

"There is an understanding from the regional sides and the Welsh management team of what is right and what is wrong in terms of player welfare," Davies told the BBC's Sport Wales programme.

"Which perhaps isn't the case when players go to France, dare I even say it in England as well, perhaps where obviously professional clubs in the Premiership want their pound of flesh.

"It's a balancing act for the players as well.

"Are they going to make a quick kill for a couple of years - and, of course, they are financially well-rewarded in Wales as well - but possibly not to the extent that some of the clubs across Europe are paying."

Clermont Auvergne's Wales and Lions centre Jonathan Davies is the latest to have signed a dual deal.

The same arrangement is in place for the rest of the nation's dual-contracted players.

Gareth Davies was asked if the WRU would stretch to bring back superstars such as North and Halfpenny.

He replied: "I think we've got to be fair to the other players as well. We don't want too much of an imbalance in what we pay players.

"I think there's a recognition that players who are very, very experienced international players will probably demand a greater figure than perhaps some of the younger people starting off. 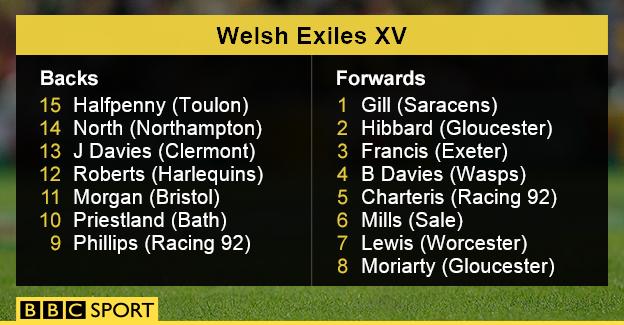 "But there is a finite pot of money so I think we have to take a judgement and that comes from Warren, the WRU and the regional parties all working together and how can we maximise the finite funds that we have available."

The man who succeeded former Wales team-mate David Pickering as WRU chairman also believes there is a "lesson" in France-based Wales players seeking to return to their homeland.

"We see players who've gone to France in particular, almost without exception looking to come back, probably, just before the duration of their contracts.

"There's a message there, I think for players who want to go.

"There will always be individual who will be tempted by a big pay day and you can't criticise players for doing that."

Welsh rugby seems set to see international lock Luke Charteris join Bath from Racing 92 at the end of the 2015-16 season while Halfpenny has been linked with a move away from Toulon.

Scarlets boss Wayne Pivac has said they are "not chasing" former wing North.

Veteran scrum-half Mike Phillips is also "considering his future" beyond the end of the season when his Racing 92 contract ends.

Watch the full interview with Gareth Davies on Sport Wales at 19:00 GMT on Friday, 20 November and afterwards on the BBC iPlayer.