Premiership title holders Sarries will host Saints, and Wasps will welcome Exeter to the Ricoh Arena.

Leicester face Stade Francais at home, having already played them twice in the pool stages, and Racing 92 will play reigning European champions Toulon.

It is the first time there is no Pro12 representation in the last eight of the competition.

Sarries, Leicester and Racing 92 guaranteed themselves a home tie in the quarter-finals last weekend, while Wasps joined them after winning Pool Five on Saturday, with three-time defending champions and Toulon joining them as one of the best runners-up.

Stade Francais were confirmed as one of the three best runners-up after they beat Tigers with a bonus point on Sunday, but the other two places went down to the wire.

Northampton's win over Scarlets on Saturday was enough to see them through as runners-up in Pool Three, and Exeter came through as winners of Pool Two on points difference after beating Ospreys.

Clermont Auvergne, last year's losing finalists, would have taken Exeter's place in the quarters had they kicked a late penalty which would have secured a vital losing bonus point against Bordeaux-Begles.

The quarter-final games will be played on the weekend of 8-10 April.

The winners of the Northampton v Saracens match will meet Wasps or Exeter in the semis, ensuring that at least one English team will reach the final in Lyon on 14 May. 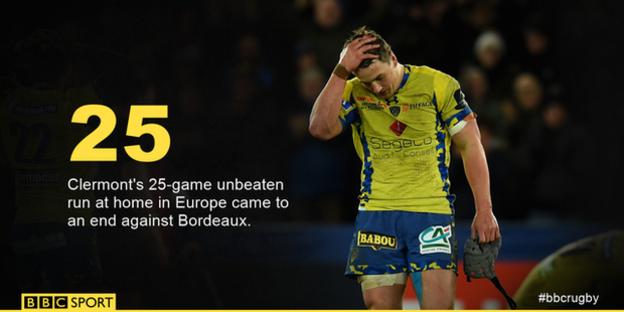