Ireland let a 13-point lead slip as Wales fought back for a draw in a compelling Six Nations match in Dublin.

The home team led 13-0 after 28 minutes thanks to Conor Murray's try and eight points from the boot of Johnny Sexton.

But Wales hit back with Taulupe Faletau's try converted by replacement fly-half Rhys Priestland, whose 72nd-minute penalty edged Wales 16-13 ahead.

With the clock in the red and fans' nerves shredded, both teams strove for the decisive score rather than settle for the draw.

But the defences held out and when referee Jerome Garces finally called a halt, there was a collective exhaling of breath around the ground.

It means Wales have not won back-to-back games in Ireland since 2000, while the Irish dream of a third consecutive title has not been fatally damaged.

But Grand Slams and Triple Crowns will have to wait for another season after a first draw between the two sides in Dublin since 1974.

With Ireland having lost Sean O'Brien and Rob Kearney in the week, Wales had to draft Liam Williams in at full-back after Gareth Anscombe's late withdrawal.

And within 20 minutes replacement fly-half Priestland was on after Dan Biggar limped off with a foot injury.

The Irish dominated the first half hour, with Wales unable to maintain possession and struggling to keep debutant CJ Stander and Tommy O'Donnell in check.

Scrum-half Murray was the beneficiary as he dummied over from close range to help establish a 13-0 lead.

But Priestland's boot, and Faletau's opportunism after the ball squirted out of an advancing scrum, somehow saw Wales back within three points at the break, and the boots of the fly-halves ensured the game ended level after a nerve-shredding second half.

Wales' dominance at the scrum was the cornerstone of their fightback, but Ireland looked more creative behind and with Stander and Jamie Heaslip outstanding in the back row, met Wales' predominantly physical challenge head-on.

Jamie Roberts ran straight for Wales and tackled hard and often, while Simon Zebo and Sexton cut lines for Ireland, with one second half break by the fly-half the outstanding moment of the match. 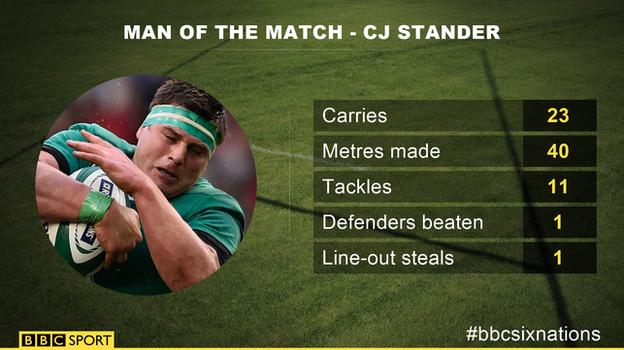 Wales face Scotland at home on Saturday, 13 February - a side smarting from their latest Calcutta Cup defeat and who have not won in Cardiff since 2002.

On the same day Ireland will take on the misfiring French at Stade de France, having beaten them as recently as last October when they won a World Cup pool match 24-9 in Cardiff.