England boss Eddie Jones said he was always confident his side would beat Scotland in their Six Nations opener.

Australian Jones, appointed as Stuart Lancaster's successor in November, oversaw a 15-9 win at Murrayfield to retain the Calcutta Cup in his first game as head coach.

"In all honesty I always thought we were going to win the game," the 56-year-old told BBC Sport.

"The only way we weren't going to win was if we did something silly."

Led by new skipper Dylan Hartley, England lacked fluidity at times and conceded 12 penalties across the 80 minutes, including eight in the first half.

But Jones was happy with the performance, considering he had had only seven training sessions to work with the squad.

"We had two weeks together, we were virtually a new team doing new things," said Jones, whose side next face Italy in Rome on 14 February.

"I'm really pleased with our application in the second half. Our defence was outstanding and there were some really good individual performances."

More to come from Scotland - Cotter

For Hartley, wearing the armband completed a dramatic turnaround.

Having thought his England career was over last year when he missed the World Cup after he was suspended for ill discipline, the Northampton forward described the experience of captaining the side as "amazing".

"It was huge to lead England out but I'm more happy we won as a team," the 29-year-old said.

"It wasn't the prettiest performance. We would do something good and then our discipline costs us. We've had two weeks together, there is so much to improve on come Monday."

Vunipola 'can be the best in the world' 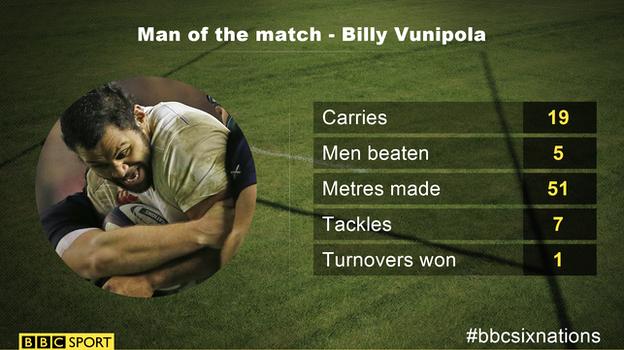 But it was man of the match Billy Vunipola who received the warmest words after a performance in which he made 19 carries - the most of anybody on the pitch.

"I have read all the articles about him being too slow to play number eight. He's doing a pretty good job as a slow number eight," Jones said.

"I thought he was outstanding with his carrying and defence work. He can be the best number eight in the world, I've no doubt about that."

Jones has introduced a more relaxed regime to the England set-up, and spoke before the game of the importance of the players socialising together and enjoying a few drinks.

It is a policy that looks set to continue.

"We've come up here and won the Calcutta Cup. We scored two tries, there are no injuries so it's been a good day at the office," the Australian said.

Former England centre Will Carling was full of praise for a trio of England forwards.

And England's World Cup-winning centre Will Greenwood added to the plaudits thrown at Billy Vunipola.

Although not all of you were impressed.

However, there were some Scotland fans retaining some positivity.