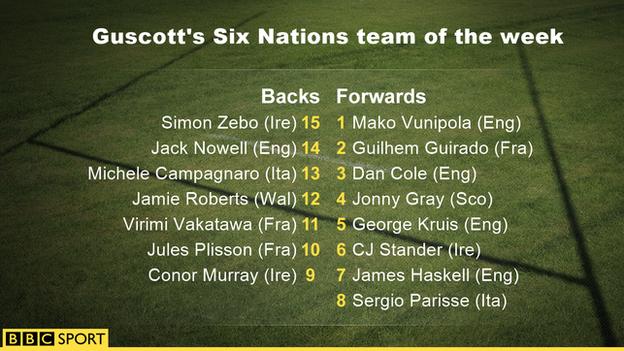 So far it has lived up to its billing.

Before the tournament started it had been built up as the tightest Six Nations in recent memory.

And after the first round of matches there is only a total of eight points separating the six sides over the three games.

Eddie Jones began life in charge of England with a 15-9 win over Scotland, France scraped a 23-21 victory against Italy, before Wales fought back from 13-0 down to earn a 16-16 draw against last year's winners Ireland.

How will the four home nations look back on a weekend of narrow margins and tightrope tension?

Faletau to benefit from expansive Wales

In the build-up to the Six Nations, Wales backs coach Rob Howley was saying how they have been trying to learn the lessons from the World Cup and particularly that period when they failed to punish an Australia side that were down to 13 men in the pool stages.

They were noticeably more expansive against Ireland than they have been in previous years. They were less predictable in attack, while keeping the ferocious defence that has been their hallmark.

Number eight Taulupe Faletau could really benefit if it is a change in style that Wales stick with. I'm a great admirer of his, but in previous seasons he has been a little restricted by Wales' gameplan. He is athletic, his footwork is superb, he is strong and aggressive in defence and he will flourish in a more ambitious Wales side.

I can't wait to see him in this tournament, then test himself against Kieran Read when they tour New Zealand in the summer, before he finally arrives at my old club Bath.

Jamie Roberts was also impressive. The 29-year-old has reached that stage, approaching your 30s, where you appreciate how lucky you are to have the career you have and also become aware that it won't last forever. That inspires you to work even harder and push to really maximise your talent.

He has had a strange first half to the season - playing student rugby for Cambridge and studying - and I think that has refreshed him mentally and physically.

If Wales lose fly-half Dan Biggar to injury for a time you know what you are going to miss: a high percentage return from your goal kicking, his excellence under the high ball - particularly chasing his own kicks - and a continuity in attack.

Rhys Priestland is certainly capable of delivering the same excellent kicking and I don't think you are losing much in attack. Both players are excellent distributors but don't make breaks regularly.

Ireland v Wales - the game of the weekend

It was a frustrating result for Ireland - who had a clear opportunity to win the game and failed to do so having taken a 13-0 lead.

However, the intensity of the match meant that there would inevitably be ebbs and flows. Neither side could keep up the pace that they set themselves in their best periods, especially considering it was the opening game of the tournament.

Ireland were missing some world-class players in Sean O'Brien, Peter O'Mahony and Rob Kearney, and they can take consolation that they emerged unbeaten from a match that was of a higher quality than the other two on the opening weekend.

If O'Brien especially is fit for next week they will be licking their lips with the chance of getting their teeth stuck into a France pack that looked pedestrian against Italy.

A difference in leadership for England

I don't think we have seen too much difference in England's play just yet after Eddie Jones taking over as coach. He's only had a couple of weeks or so with the players so it is far too early.

What we have seen is a difference in leadership and presentation. He is very direct in news conferences - he does not um and ah over words - and his players are clearly in no doubt about what he wants from them. And I don't think he will stand for too many poor performances from any individual before they are gone.

George Kruis made an immediate good impression and was vying with Billy Vunipola for man of the match.

The Saracens lock was impressive in the line-out - winning the ball nine times including one steal - made 16 tackles - only two less than open-side flanker James Haskell, and took his try well too.

He left his mark on the game and the Scottish players.

The exciting thing about number eight Billy Vunipola is not just the high level of his performance, but also the room for improvement. He made a team-high 22 carries and was often making yards off a standing start. If he attacks the defence at pace he will be an even more effective player.

The backline, by contrast, did not get too involved. England kicked from hand 41 times - that is a lot. Territory is vital - you have to get it as efficiently as possible and that is often by kicking - but sometimes it was needless and brought on by nerves and inexperience.

What was encouraging was the unstructured heads-up rugby that produced Jack Nowell's try. There was nothing pre-planned in the way that Ford, Farrell, Mako Vunipola and Nowell played off each other. That beautiful offload by Mako Vaunipola would have us all raving if it had been a New Zealand or South Africa prop.

We have yet to see how long a leash Jones has given them to play off the cuff like that, but I feel that they will have permission to go for their lives - just so long as they execute properly.

A missed opportunity for Scotland - again

The stats are kind to Scotland.

When you peruse the figures you see them making lots of tackles - both as a team and individuals - and enjoying enough territory and possession to win games, but consistently they are failing to do so.

And that is because they are making their mistakes in the areas and periods of the game that matter most - that is something that the stats don't show so easily. Scotland make critical mistakes at vital times. There are errors where there needs to be clarity of thought to get over the line and make pressure count.

Coach Vern Cotter said afterwards that they could have won the game but for a few mistakes, but I think behind closed doors he will have given them an earful because it was another missed opportunity.

There was a period between the 14th minute and 38th minute in which they were dominating the game and could have scored two tries, a penalty and a drop-goal. That would have been a serious half-time lead, but their lack of composure and ability to solve the problem in front of them meant most of those points were left out on the pitch rather than on the scoreboard.

I like Mark Bennett and Matt Scott as a centre combination, but wing Tommy Seymour made too many errors and fly-half Finn Russell played like he had the weight of the nation on his shoulders.

Cotter will keep faith with these players. He is right to because they are young and did reasonably well in the World Cup. But he also doesn't have a whole lot of other options.