Centre Jamie Roberts says there is a lot of pressure on Wales when they host Scotland on Saturday, having drawn their Six Nations opener in Ireland.

Wales fought back from 13-0 down to draw 16-16 in Dublin last Sunday, but no side has ever won the Six Nations after drawing their opening match.

"We know it is a must-win game. There's a lot of pressure on the whole team."

Under head coach Warren Gatland, Wales are yet to lose to Saturday's opponents Scotland, who have not won in Cardiff since 2002. 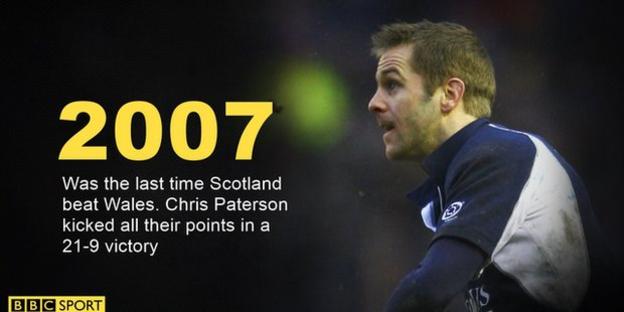 "That pressure usually brings out the best in us and hopefully that will stand us in good stead," he said. "We [won the title] in 2013 having lost the opening game.

"Everyone's watched the video back. Some of the opportunities we created and didn't finish were quite disappointing from the Ireland game.

"This is a team who are looking to improve on last week."

Roberts will again partner Jonathan Davies in Wales' midfield after they were denied the chance to appear together at the 2015 World Cup by Davies' knee injury.

The Clermont Auvergne centre and Roberts were reunited in Dublin, and against Scotland Davies wins his 50th Wales cap.

"To make 50 is really humbling, and hopefully we can get the result and have a good celebration afterwards. I am chuffed to bits," said Davies.

Davies' Wales debut came on tour in Canada in 2009 while Roberts was earning the British and Irish Lions player of the series award that summer in front of packed South African stands.

"I remember going to the ground in Canada and we were playing on a university pitch in Toronto," he said.

"[Wales wing] Tom James was at the back of the bus, and when we turned up at the ground there weren't even any stands there - I think they were putting them up on the Friday afternoon - and Tom said 'can you imagine winning your first cap there?' But thankfully, I've gone on to get a few more."

Davies says his partnership with Roberts was not greeted with universal approval at first.

"People were dismissive of the partnership, but we've gone away and worked hard and done a few good things over the years," he said. "Hopefully, there is more in us.

"I wouldn't say we are like a married couple, but on match-day we know what each other is doing and just let the others carry on."