Having seen their World Cup hopes comprehensively dashed at the quarter-final stages by Argentina it has been a tough few months for the men in green, so what is going wrong with Joe Schmidt's side?

I am not so certain that Ireland are trying to do anything different after the World Cup to be brutally honest, although it's been difficult for the past two weekends because it has rained on both occasions.

Ireland did some things well against France but I was a little bit annoyed they didn't take a kick at goal early on.

They should have, they didn't, and you need to take your chances when you are inside the opposition 22. Ireland spent a lot of time there in the first half and didn't take their opportunities.

France spent 15 minutes in Ireland's 22 in the second half and got away with a converted try. That won the game.

I don't know whether it was intentional or not, and you could say anything retrospectively, but France having their two normal starting props - Rabah Slimani and Eddy Ben Arous - on the bench to come on with 35 minutes to go was a game-changer. 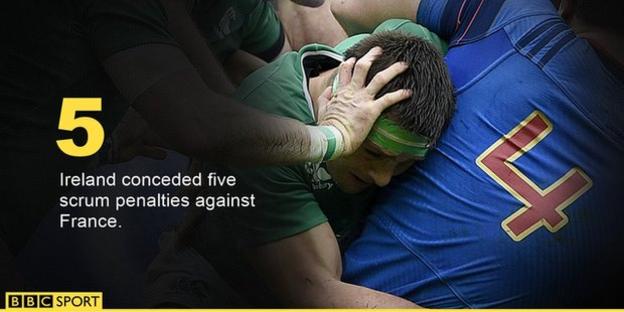 Whether that becomes a trend you don't know.

I think in part Guy Noves was trying to give them a bit of a rocket because they were a bit lazy last week against Italy at the scrummage. But this week it was different - the scrummage was the reason France won the game.

Time to offload the blame?

There was a mad statistic from the first weekend that France had 20 offloads against Italy, and Ireland only had two against Wales. 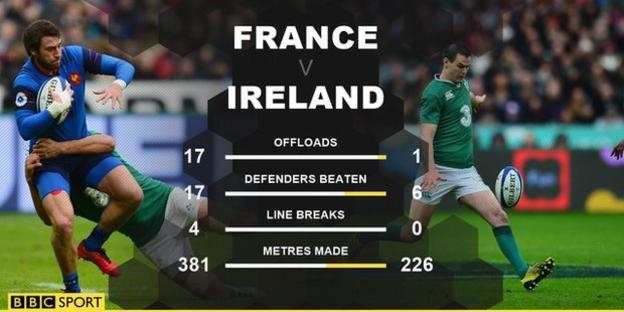 This week it was similar - France had 17 to Ireland's one. I think that is actually too many for France - they are kind of pointless offloads with no benefit to them. For Ireland, that is too few. When is a good offload a good offload? Well, you need to calculate the risk.

My belief is that Ireland don't have enough players running for the positive break. When a player gets in around the back of a side or gets over the gain line and looks to pop a pass, there should be a guy ready to run at 100 miles an hour on his shoulder.

There also needs to be a guy to run and make the ruck if he doesn't offload it. Ireland are putting the guy into the ruck but not the supporting runner looking for the offload.

You do two of those a game and that could be two tries, although that is a very simplistic way of looking at it.

In the World Cup one of the favourite things I analysed was New Zealand scrum-half Aaron Smith. When he passed the ball off the scrum he immediately set off running in front of the backline from one side of the field to the other.

He - and their other scrum-halves - do it on the chance that one of their wingers on the far side of the field gets tackled and they are there for the inside pass for the offload.

New Zealand score so many tries under the posts from their scrum-half and it just comes from running a positive line.

If we have our full team on the field we will be very close and that's the truth of it. But Ireland have a ludicrous injury list - it's too many. A lot of our guys are a little bit over 30 and we are in a point of transition. Do you say, let's transition some younger guys? 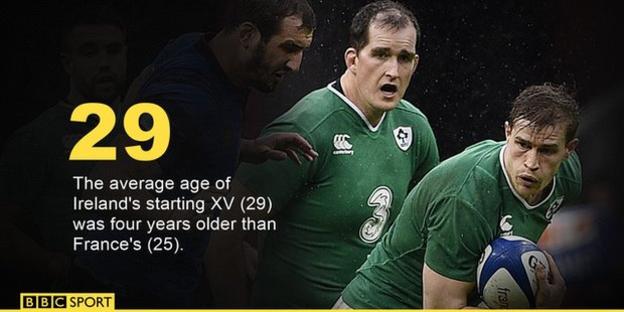 It's much easier to bring a young guy in when you have got a settled senior team and it's very hard to bring five guys in at once.

We suffered against France because the scrum didn't hold up under pressure. But I think we would be having this conversation even if the scrum had held up because you want to see a bit more from the team.

I think Ireland still tend to be a little bit slow bringing guys through at provincial level. That then makes it harder to bring people through at international level.

In some ways it may be a simple case of having the right players on the field. The right players for me are the likes of Simon Zebo and Keith Earls because of their gas - their pure gas.

They may never get the ball on the support lines that I would like to see but if they do it should be a try.

Ireland are a team in transition with a very tough year ahead of us. We have got a three-match summer tour to South Africa, and then Australia and New Zealand in the autumn - all following on from a World Cup year.

We are still in a spot of World Cup fatigue. That, and the six-day turnaround from the Wales game, one less than France, makes it difficult.

Am I totally despondent about where Ireland are? No, I am not. I think I am being realistic.

I don't think Ireland overachieved last season in winning the Six Nations title. Ireland are used to winning now and want to do well all the time.

I think circumstances, from injuries to the weather, have dictated that our game plan sometimes can be put under pressure if one facet of our game doesn't work.