Scotland have recalled fit-again wing Tim Visser in the only change to their side to face Italy in Saturday's Six Nations match in Rome.

Visser, who has played two matches for Harlequins since returning from a hamstring injury, replaces Sean Lamont.

Full-back Stuart Hogg and wing Tommy Seymour are fit after suffering knocks in Cardiff, while Duncan Taylor retains the number 12 jersey ahead of fit-again Matt Scott after a strong outing against Wales. 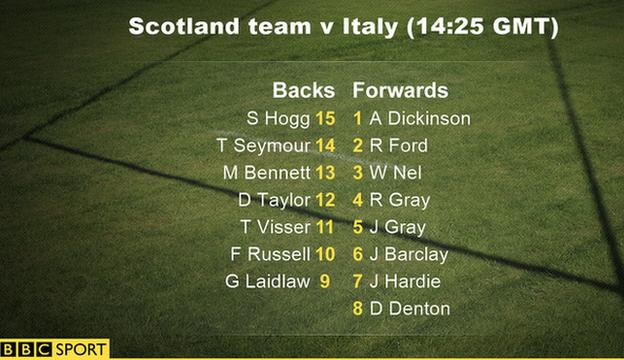 Wilson was omitted from Scotland's initial Six Nations squad, but has been preferred to Glasgow team-mate Josh Strauss as head coach Vern Cotter looks to bolster the strength of his replacements.

The versatile Horne, usually a centre or full-back, will also provide fly-half cover for Finn Russell, with Weir dropping out.

Scotland are aiming to end a nine-game Six Nations losing run with victory in Rome, scene of their last win in the championship in February 2014.

Scotland have won five of their last six meetings with Italy, including home and away victories in warm-up Tests before last year's World Cup, but have lost on five of their eight Six Nations visits to Rome.

"Italy have shown they are a talented team, particularly in their performance away against France, but also against England," said Cotter.

"They surprised both teams with their physicality, intensity and quality, all of which we will have to be ready for, and at least equal to, if we are to win in Rome this weekend.

"We have worked hard to improve our game and will stay true to the core values of this team, which is to work hard but stay calm; have belief in our systems, ourselves, and enjoy the opportunity."