Homecomings aren't always happy affairs. It depends what you're coming home from.

For England, on their first return to Twickenham after a World Cup failure that will haunt those involved for years to come, their 21-10 win over Ireland was cause for both relief and regret.

Relief that they are three from three under the new regime, relief that their imprecision and indiscipline was not punished, relief that in Billy Vunipola they have a man who is already a game-changer and may yet become the best number eight in the world.

Regret that so many of the old weaknesses are still apparent, regret that they made something which should have been simple so much harder for themselves.

At one stage in a first half that was high on ambition and higher still in errors, the television cameras cut to a face in the crowd as impassive as he had been all smiles on his last visit.

All Blacks coach Steve Hansen rarely gives anything away. But after a World Cup in which his side illustrated so sweetly how yawning the gap is between the best of the south and the toilers in the north, you could have forgiven him a frown and a simple question: has the Six Nations learned nothing from last autumn?

Perhaps this was not the afternoon for the sort of rugby that lit up that balmy October and sunny November. A wind that had been cheek-nipping in the afternoon turned skin-ripping as the daylight faded. Passes dropped off frozen fingers. Brains iced up with attacking spaces open and defensive holes to be filled.

Perhaps, too, new England coach Eddie Jones does not regret that his new side sunk to such lows four months ago. He would never publicly admit it, but like a politician taking power after recession, his task is in some ways much easier for the mess that preceded it.

This is no revolution from England, not yet. Twelve of the side that started on Saturday had started the corresponding fixture in Dublin a year ago. England had won four of their last five against Ireland and lost at home to them only once in a decade.

This win must sit in that context. Yellow cards for James Haskell - he has now been sin-binned more than any other player in Six Nations history - and replacement scrum-half Danny Care left Jones's side playing half the second half a man down. A domination of territory and possession in the opening 40 minutes brought a lead of just three points when the match could have been closed down.

When Wales arrive in a fortnight, memories of their late triumph here in that pivotal World Cup group game still keeping so many warm into the winter nights, they are unlikely to be as generous as Ireland.

Joe Schmidt's side lost three of their four attacking line-outs on the England line and blew an attacking scrum in the same auspicious position; they won 10 turnovers to England's two yet too often brought pressure back on to themselves with poor decisions and sloppy execution. 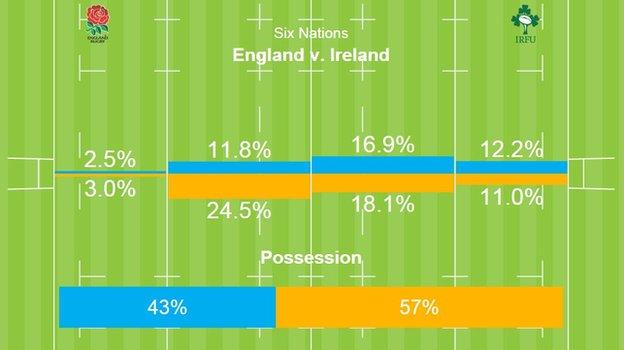 This is a start, nothing more for now, nothing that different to what Jones's predecessor Stuart Lancaster achieved at home.

And that is exactly what should be expected of Jones. He has had this team for three matches, two of which were away from home. No side accelerates from a standing start. No coach, no matter how long in the tooth or wise of thought, can rapidly transform a nation who have won just one Grand Slam in two decades.

What will give Jones hope that over the next few years he might succeed where others have failed is the emergence of the sort of player that successful teams can be built around.

Vunipola is still only 23. He is still growing in strength and growing into his role. He finished the World Cup injured and upset, in his own reserved way, that he barely knew the true character of the men he had been playing with. 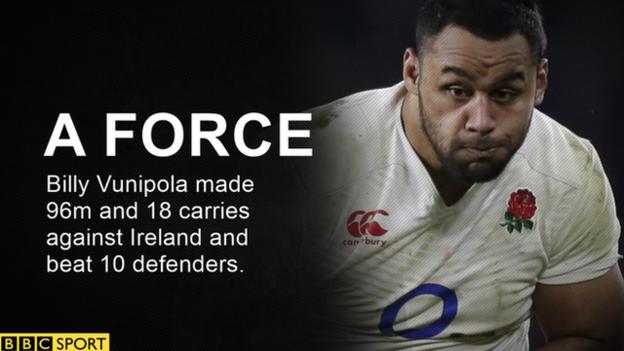 Jones has had time to make some changes at least. One of them was to allow his players a beer or two in the dressing-room after matches, a few looseners in the pub well before games to get to know each other as more than just rugby players. Another was to make Vunipola, a naturally shy giant, one of his three vice-captains.

It seems to be working. Saracens deserve credit for making the number eight fitter and more mobile than he has ever been. Vunipola deserves Jones's thanks for smashing holes in the Irish defensive line, getting up and then asking for more.

In the first half alone he carried for 75 metres, more than the entire Irish team put together. Across the 80 minutes - and it wasn't that long ago that Vunipola seldom lasted more than 60 - he made 18 carries and beat 10 defenders, a consistent outlet in defence and a wrecking-ball in attack.

"He is only going to get better," said Jones, unable to keep a contented grin off his face. "He's still just a kid learning the game.

"He's enjoying the team environment now. He's not a great talker but he leads by example, and that's what we want our vice-captains to do."

Then there is Maro Itoje, making his full debut a year younger than both Martin Johnson and Paul O'Connell, the two great second row titans of this old fixture to which the team's defence coach Paul Gustard has compared him.

It could be claimed that Itoje has been hyped for years, except his performances captaining England's age-group sides and then in the Premiership have rendered that more honest account than hoopla.

On Saturday, he was as he has been on the way up - quick, powerful, intelligent with the ball and smart without it.

Jones has been around too long to put too much pressure on too young a talent; when he first brought Itoje into his squad, he described him as a Vauxhall Viva who he hoped to turn into a BMW.

After the win over Ireland he allowed himself a little more. "Whatever the level is up from a Vauxhall Viva is, he's on that. Is that an Astra?"

There were other reasons for Jones to be smiling - Jack Nowell's eyeballs-out try-saving tackle on Robbie Henshaw; George Kruis and debutant Elliot Daly's work in putting enough doubt in the mind of referee and TMO that neither could award Josh van der Flier a late try that, in truth, he probably scored.

"We'll only get better as players understand how we want England to play," he said. "We probably left 15 points out there, but get the structure right and the finishing will come. Today was a pretty decent step up."

Better they will have to get - better to hold off a physical and fired-up Wales in a fortnight, better still to take this unbeaten streak to five. And better, far better, if Hansen is ever to watch a Six Nations match and be genuinely fearful of the sides he sees.