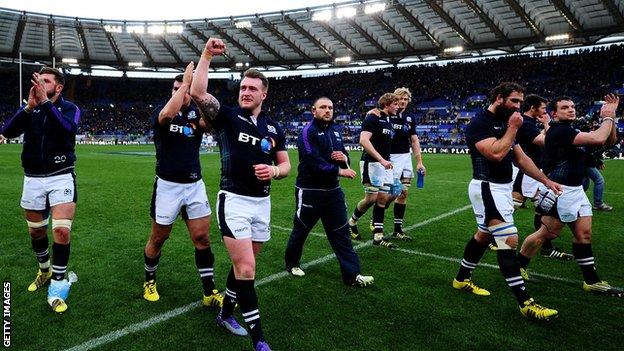 Scotland are "not going to get ahead of themselves" after their first Six Nations win for two years, insists prop Al Dickinson.

The Scots ran in three tries to beat Italy 36-20 in Rome to end a run of nine successive tournament defeats.

With games against France and Ireland to come, Dickinson reckons further improvements will be required.

"There were some good things but if we want to compete against the top teams we have to raise our game," he said.

It was a first Six Nations success for many of the Scotland players and for head coach Vern Cotter, who took charge in the summer of 2014.

"There was quite a bit of pressure on us to win and it was a tough match. But we stuck to our guns and it's just really pleasing."

Much of the build-up to Saturday's match in Rome was dominated by Scotland's poor run in the Six Nations, with former captain Andy Nicol suggesting the clash was one of the biggest in Scottish rugby history.

However, Edinburgh's Dickinson, who won his 55th cap in the win at the Stadio Olympico, maintains the squad was simply focused on their own game and not listening to others.

"I stay away from the media so I didn't see much of it," he said.

"There was enough pressure on ourselves to perform. We've come here and won but we realise where we are at the minute."

The players will enjoy a few days off ahead of playing France at Murrayfield on 13 March.

And Dickinson is determined to build on the Rome success as Scotland chase a second victory in the tournament for the first time since 2013.

"We've still got a lot of things to improve on but the foundations are there," he added.

"We've proved it at times during the World Cup and in the first two matches in the championship [defeats to England and Wales] we played quite well.

"But France in two weeks time is another massive game and we have to step up our performance even more.

"We get an extra week of training so we get to rectify a few things but we go into the France game full of confidence."