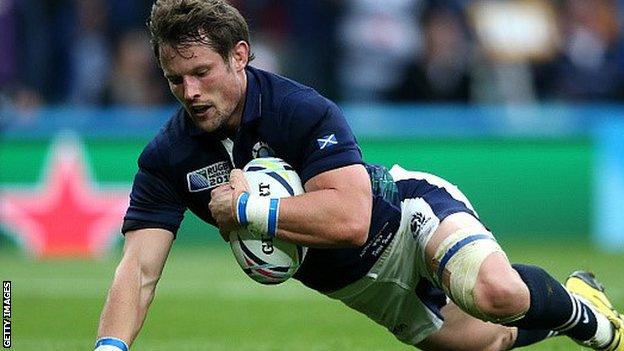 Centre Peter Horne says Scotland are 'desperate' to back up their Six Nations victory over Italy by ending a 10-year drought against France.

Having ended a nine-match losing run in the tournament, Vern Cotter's men have two other targets in their sights.

They have not beaten France in their past 10 meetings since 2006, and lost their last seven Six Nations matches at Murrayfield since February 2013.

"We are all desperate to get better and drive the nation on," Horne said.

"That has to start with France. We have to go out and back it up now. Just because we've won one game, it doesn't make us world beaters.

"Believe me, in that changing room we are the first to admit that.

"We are desperate to win another game, especially at home for our fans. It's been a while since we've won at Murrayfield in the Six Nations and everyone deserves that. So it would be great if we could go out and do a job on France."

Scotland's last home Six Nations win was a 12-8 backs-to-the-wall triumph [they won with 29% possession and 23% territory] over Ireland in February 2013.

But buoyed by a dominant scrummaging performance in Rome, Horne believes Scotland's pack can match the muscular threat of the French eight - particularly with front-row trio WP Nel, Ross Ford and Al Dickinson in prime form - at Murrayfield a week on Sunday.

"France are a massive, physical side," Horne, who replaced Mark Bennett for the last 16 minutes at the Stadio Olimpico - noted.

"Everyone expects all that Gallic flair, but they have some big men and the coaches in France love that.

"So we will really need to match them up front. We can't be scared to have a crack. If we can get our set-piece right like we did in Rome and win the breakdown, we will certainly have a chance because we have some fantastic outside backs who can score us tries.

"There is nothing better as a back than seeing your scrum moving forward and winning penalties. You can stick the ball in the corner, win the line-out and drive forward.

"In the past teams have done that to us but WP, Fordy and Dicko have put in fantastic performances over the last few weeks. You can't under-estimate how great that is for us."