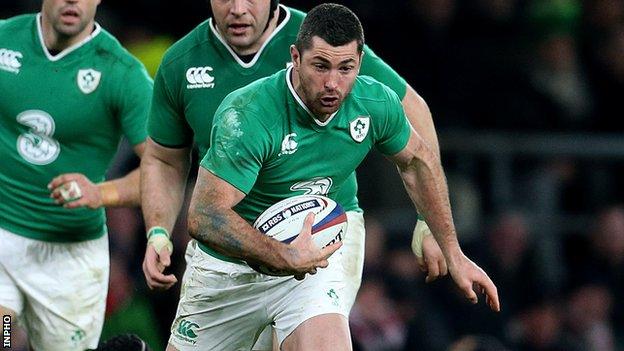 Ireland full-back Rob Kearney is an injury doubt for Saturday's Six Nations game against Italy at the Aviva Stadium after picking up a hamstring strain.

Kearney must prove his fitness prior to Thursday afternoon's team announcement, with fit-again Jared Payne waiting in the wings to slot in at 15 if required.

That scenario would allow coach Joe Schmidt to pair Stuart McCloskey and Robbie Henshaw in the centres again.

Schmidt received a welcome boost however as flanker Tommy O'Donnell played a full role in training.

The Munster back-rower suffered a stinger injury to his shoulder during Munster's 26-5 win over the Dragons at Thomond Park on Saturday.

Kearney missed Ireland's 16-16 draw with Wales with a hamstring issue before returning in time to play in the 10-9 defeat by France in Paris.

The 29-year-old faces a race against time to be fit for the second time in the tournament, with head coach Schmidt likely to hand one of his most trusted lieutenants as much leeway as possible.

Simon Zebo could also deputise at full-back should Schmidt opt to restore his first-choice centre pairing of Henshaw and Payne.

Ulster powerhouse McCloskey impressed despite Ireland's 21-10 defeat by England on his Test debut at Twickenham in the last Six Nations outing however.

Head coach Schmidt's men are desperate for their first win at the fourth time of asking this weekend, to boost a disappointing tournament that has already seen Ireland concede the title they have held for the last two years.

Ulster's New Zealand-born three-quarter Payne admitted he will be happy to feature at either 13 or 15, having recovered from the hamstring problem that kept him out of action at Twickenham.

"I've always played wherever," said Payne, who switches comfortably between full-back and outside centre at Ulster.

"I'd played a lot of 13 in New Zealand and there were a few injuries at Ulster when I arrived so I was happy to slot in at full-back.

"But playing well for Ulster is different from turning it on for a Test match.

"I think Joe would be silly not to look at the centre combination of Stuart McCloskey and Robbie Henshaw again at some point.

"They were pretty impressive against England, so I'm sure there'll be another chance to see them at some stage.