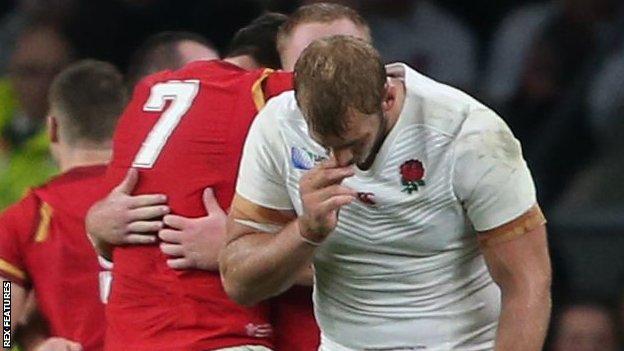 Wales will have to be "quite a bit" better than they were last year's World Cup if they are to beat England at Twickenham, according to forwards coach Robin McBryde.

The former international hooker says England have improved since their 28-25 loss against Wales in September.

"I think there's more of an edge about them, without doubt," said McBryde.

"They look far more comfortable in expressing themselves."

Asked if Wales would need to improve over their World Cup performance, McBryde replied: "Quite a bit, really."

England are one point clear of Wales at the top of the table with three wins from three games.

The winners of Saturday's encounter will be strong favourites to win the tournament, with Wales coach Warren Gatland having called the game a "cup final."

Both teams are unchanged, with Wales impressing their management in training on Thursday.

"During the session the coaching team looked at each other and said 'we're in a pretty good place at the moment'," added McBryde.

"The fluidity and intensity gives us a lot of confidence.

"We've steadily got better and better as the tournament has gone on and the longer we spent together the better we seem to get."

England and Wales also engaged in a verbal dispute, each saying the other employs illegal scrummaging tactics.