Victory against France on Saturday will hand England their first Six Nations Grand Slam since 2003.

Eddie Jones' men have already seen off Wales, Ireland, Scotland and Italy - can they wrap it up in Paris?

Despite going into the game as favourites, history is not on their side. Since the five nations became six in 2000, England have had five chances to win the Grand Slam - but have only managed it once.

BBC Sport looks back at where and how it was won and lost. 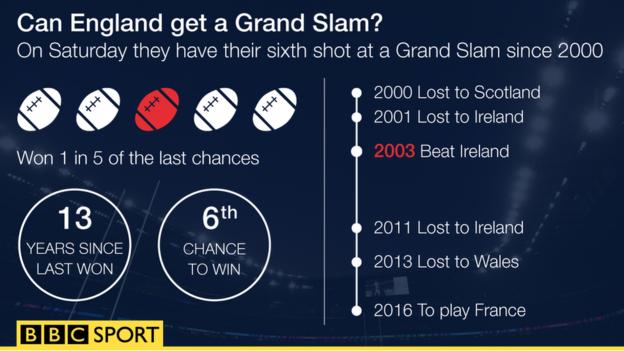 In the inaugural Six Nations tournament, an England team featuring Mike Tindall and Jonny Wilkinson looked like they had got the Grand Slam sewn up, with their final game being against winless Scotland - who had beaten them to the title the year before.

But the Scots had other ideas. Driving rain had turned Murrayfield into a mud bath, and the English, determined to keep the ball in hand, failed to deal with the conditions.

Duncan Hodge scored four penalties and a converted try to earn his side an unexpected 19-13 victory and deny England a clean sweep.

The result also meant Scotland avoided the Wooden Spoon, which instead went to Championship debutants Italy.

The Six Nations... in October? It happened in 2001 and may have contributed to England falling at the final hurdle for a third consecutive year as they chased a Grand Slam - (the final year of the Five Nations being the start of the run).

Three of Ireland's fixtures in the Championship had to be postponed after the foot and mouth disease outbreak in Britain, and were eventually re-arranged for the autumn.

England travelled to Dublin unbeaten that year. Sir Clive Woodward's team had a clean run through their first four Six Nations games in the winter, and had easily overcome USA and Canada in the summer Test series.

But they fell at the last hurdle again, losing 20-14 at Lansdowne Road. England lifted the cup after finishing top of the table, but the celebrations looked a little forced.

In March 2003 - when being crowned world champions seemed like a distant dream - England finally ended their eight-year wait for a Championship Grand Slam.

A dominant 42-6 win over Ireland - featuring tries from Lawrence Dallaglio, Tindall, Will Greenwood and Dan Luger - gave England five wins from five in the tournament.

Fast forward eight months and you could hear fly-half Wilkinson's jubilant screams of 'World Cup! World Cup!' as he kicked his side to victory and lifted the Webb Ellis Cup in Australia.

England lifted another Six Nations title in 2011, but it was bittersweet once again for the men in white.

Coached by former captain Martin Johnson, England overcame Wales, Italy, Scotland and France but tripped up again against Ireland in the final game, with a resounding 24-8 defeat in Dublin.

Speaking after the game, Johnson said his side got it "very wrong" against the Irish.

They also got it very wrong later that year in the World Cup in New Zealand, where a quarter-final exit and off-field antics eventually cost Johnson his job.

Wales needed a winning margin of at least seven points to snatch the Six Nations title from England's grasp. But why settle for seven when you can win by 27?

The Welsh had won the Grand Slam the previous year, but coach Rob Howley said the victory in Cardiff felt even better.

England assistant coach Andy Farrell responded by saying: "It is perhaps a good experience for our guys to stand there and see what it is like to see a team lift the Six Nations trophy."

It was Ireland who actually won the next two titles, but this season, for the first time in five years, England have secured the Six Nations trophy.

On Saturday, can they go on to win the coveted Grand Slam as well?