Scotland coach Vern Cotter has made three changes to his starting line-up for their final Six Nations match against Ireland in Dublin on Saturday.

Ryan Wilson returns at number eight for Josh Strauss, who drops to a bench including Rob Harley and Henry Pyrgos.

With Swinson promoted to the starting line-up, Harley will provide second-row as well as blind-side cover, and scrum-half Pyrgos takes over from the unfortunate Sam Hidalgo-Clyne.

The Edinburgh player has tasted just three minutes of action after being on the bench for all four Six Nations matches to date.

Pyrgos, meanwhile, has recently returned to action for Glasgow after an operation on his wrist after last autumn's World Cup.

His inclusion means there are 11 Warriors players in the match-day 23. 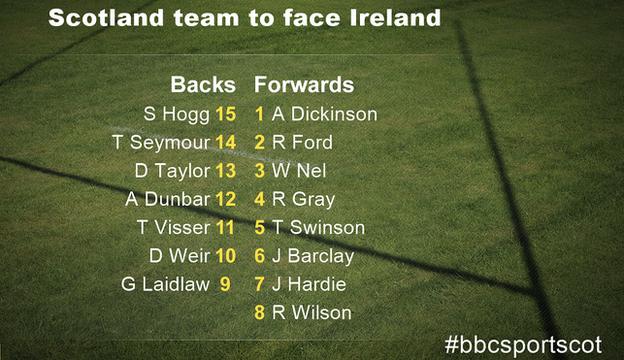 Weir, who will move from Glasgow to Edinburgh at the end of the season, last started a Test against South Africa during the World Cup.

The 24-year-old appeared as a replacement in Scotland's second Six Nations match this year against Wales, but was left out of the 23 for the wins over Italy and France, turning in two man-of-the-match displays for Glasgow instead.

"Duncan has been training with the group and he is playing well with Glasgow, so it is a great opportunity for him," said Cotter.

"He gets to lead us out on the park in the number 10 jersey, and brings his energy and freshness to it, so it's a good thing."

Peter Horne, who excelled after taking over from Russell just five minutes into last Sunday's Test, has to settle for a place on the bench again.

"Peter played really well when he came on," Cotter noted. "We are hoping he will bring the same contribution, whether it is at 10, 12 or 13."

Gray's injury also means a rare start for Swinson, 29, who has won his last 11 caps off the bench, including all four matches in this campaign.

It will be his eighth Test start and his first since the defeat by Italy at Murrayfield in last year's Six Nations.

Wilson, who impressed in the victory in Rome before suffering an ankle injury which hampered his training before the France match, gets a second start at number eight.

"Ryan probably has slightly fresher legs than Josh after the France game," Cotter explained. "We have had limited time to prepare, which is always a bit of a worry, so we have gone with a bit of freshness."

Captain Greig Laidlaw will surpass David Sole's record of leading Scotland in 25 Tests as his side target three straight wins in the championship for the first time since 1996.

Scotland have only won once - in 2010 - in Dublin in eight attempts in the Six Nations era.

They have only scored four tries in their last 10 Six Nations Tests against the Irish over the past decade, but did manage three in a 28-22 pre-World Cup warm-up defeat in Dublin last August.