London Irish captain Luke Narraway says his side quickly got "themselves back on the horse" and focused on the next step in their Premiership survival bid.

Narraway led The Exiles to a first win in six matches against Gloucester on Sunday to claim a vital four points.

The victory at the Madejski Stadium pulled them to within five points of second-from-bottom Newcastle.

"This has to be the beginning rather than just a flash-in-the-pan win," Narraway told BBC Sport.

Irish travel to Worcester on Saturday knowing they will need to end an away-win drought of more than a calendar year to haul themselves off the bottom of the table with five games remaining. 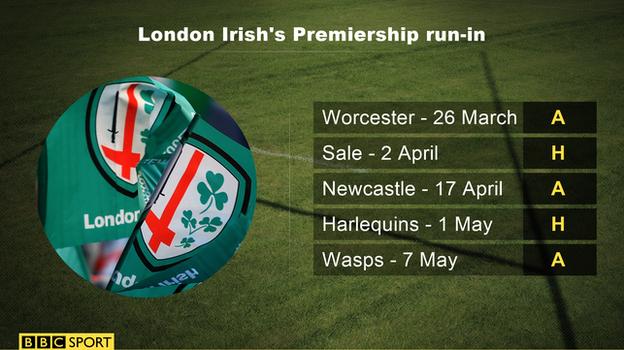 "We've had the belief we can get ourselves out of this situation," Narraway said. "The win against Gloucester just gives us a bit of confidence in what we're doing."

Narraway revealed he gave his side an impassioned post-match speech after the win over the Cherry and Whites.

"It was a case of telling the boys to enjoy the moment and the occasion as well as each other's company, but to be straight back on it from Tuesday," he said.

"To be fair, the boys have done just that. Every game is a pretty big one in the situation we're in. Games are running out.

"If we can register a first away win of the season at Worcester, it really would cut that points deficit down and give us a fighting chance."