Johan Cruyff, who has died at the age of 68, was one of football's greatest and most significant figures. The proof lies in two phrases with which he will always be synonymous.

One is "Total Football" - the style epitomised by the Netherlands team, with Cruyff as the centrepiece, who reached the 1974 World Cup final under Rinus Michels before losing to West Germany.

It was a philosophy based on the theory that any outfield player could play in any other position on the pitch with comfort. Under his mentor Michels, Cruyff was the embodiment of the supremely skilled, multi-purpose footballer.

At that same World Cup, he invented a piece of skill that will be his calling card forever.

"The Cruyff turn", when he bamboozled Sweden defender Jan Olsson with a touch of football ballet, allowed him to drag the ball behind his standing leg with the inside of his foot. It combined instinct, quick thinking, athleticism and natural ability. In other words, it was Johan Cruyff.

Cruyff was not simply the talisman for that Dutch team, he was the idol of Amsterdam as the inspiration behind three successive European Cup wins in 1971, 1972 and 1973 - before putting his playing brilliance into practice as a coach to lead Barcelona to their first European Cup in 1992 after winning the European Cup Winners' Cup in 1989.

The adage that great players do not necessarily make great coaches did not apply to Cruyff.

He has left an indelible mark on the game that will live on in the stylistic approach he brought to Barcelona and is maintained to this way. It will come to the Premier League next season when his prodigy Pep Guardiola takes over at Manchester City.

The idol of Ajax

Cruyff's mother was a cleaner at Ajax and persuaded the club to take her 12-year-old son into their youth system. It was a day that altered the history of a great club.

In two spells at Ajax, he won the Eredivisie eight times, but it was on the European stage that he was able to establish his name in a global context.

With elegance, grace, skill and a force of personality that made him a player as well as an outspoken, divisive character, he took Ajax to the pinnacle of the European game.

Cruyff, under the tutelage of Michels, helped Ajax thrash Bill Shankly's great Liverpool side 5-1 in a European Cup tie in December 1966, also scoring twice in the 2-2 draw at Anfield in the second leg.

It was those halcyon early 70s days, however, that the man called "Pythagoras in boots" by the British sportswriter David Miller established a reputation that will live on wherever football is played.

Ajax ruled Europe, beating Panathinaikos 2-0 at Wembley in 1971, repeating the feat via two Cruyff goals against Inter Milan in Amsterdam a year later then completing a European Cup treble with 1-0 win over Juventus in Belgrade in 1973.

At the heart of this thing of football beauty was Cruyff, the master of time and space and creator supreme.

He was the greatest among a collection of great players but a man apart on and off the pitch, his famous choice of the number 14 shirt a public symbol of his determination to be different.

After spells in the United States with Los Angeles Aztecs and Levante in Spain, he returned to Ajax and showed the old magic in two more title wins.

Contrary, complex, controversial and self-confident as ever, he reacted to Ajax's failure to offer him a contract by moving to arch-rivals Feyenoord - then winning their first Eredivisie in a decade in 1983-84 as part of a league and cup double.

The love affair with Ajax was rekindled when he took over as coach. His innovative thinking and his ability to connect his ideas to young players came to fruition in the 1987 European Cup Winners' Cup Final with a 1-0 victory over Lokomotiv Leipzig in Athens.

Cruyff's side that night had the skills of the young Aron Winter and Dennis Bergkamp alongside the brilliance of Marco van Basten and experience of Arnold Muhren.

The talisman of Total Football

Cruyff's international career reached its zenith in West Germany in 1974, when the Netherlands carried all before them before falling at the final hurdle to lose 2-1 to the hosts in Munich's Olympic Stadium.

In a series of displays that illuminated the tournament, opponents were dismissed with style and panache, including the 1970 winners Brazil who, in an ironic reversal in styles, effectively attempted to kick Cruyff and his colleagues of out the tournament. It was to no avail as Cruyff's athletic, stretching volley helped secure a 2-0 win.

In the final, Cruyff's raking run from the kick-off saw English referee Jack Taylor award a penalty inside the first minute, Johan Neeskens putting the Dutch ahead.

In act of confidence bordering on arrogance, Cruyff's side appeared to then attempt to humiliate the Germans rather than beat them, a fatal error as the side widely accepted as the best in the 1974 World Cup allowed Helmut Schoen's West Germany to recover and win 2-1. 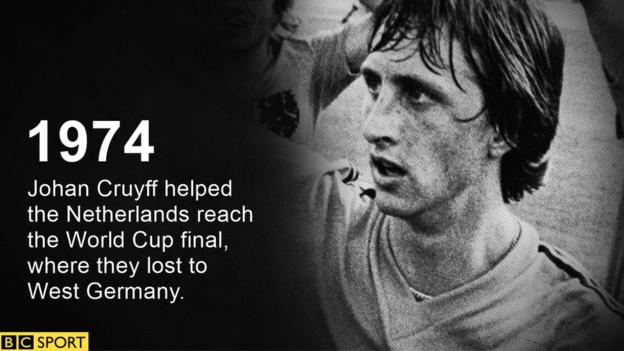 It was a missed opportunity for Cruyff to claim the greatest prize of all and it would never come again as he shocked the game by announcing his retirement from international football in October 1977.

Various theories abounded as to why he did not wish to play in the World Cup in Argentina the following summer, from fear of kidnapping attempts to disapproval with the military dictatorship in power in that country at the time. How his country needed him as they once again lost to the hosts in the final, 3-1 after extra-time.

He won the Ballon d'Or three times in 1971, 1973 and 1974 and was voted the best player at that year's World Cup - an accolade anyone who witnessed that tournament would accept he fully deserved.

Cruyff's legacy transcends a medal collection. The phrase "Total Football" is written in the sport's lexicon and will have his, and Rinus Michels', names alongside it.

In the summer of 1973, his mission at Ajax complete, he moved to Barcelona and proceeded to establish himself as arguably the most important figure in the history of the club.

The words of Guardiola, now the most celebrated coach in football, can be used to outline Cruyff's influence at the Nou Camp.

Guardiola, who won the Champions League twice with Barcelona in 2009 and 2011, said: "Throughout my career I've simply tried to instil what I learned from Johan Cruyff." 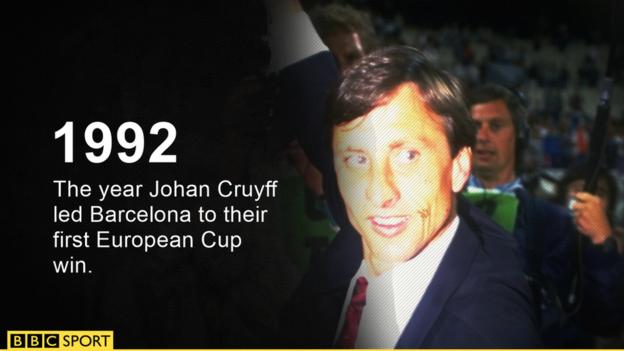 And referring to Barcelona, he said: "Johan Cruyff built the cathedral. Our job is to maintain and renovate it."

He began that building process as a player, becoming a hero of Catalonia as they won La Liga for the first time in 14 years at the end of his first season.

It was when he became coach in 1988, however, that Cruyff shaped the Barcelona style maintained today through Lionel Messi, Neymar, Luis Suarez - and the passing "carousel" characterised in recent years by Andres Iniesta and Xavi.

It was taking shape in 1989 when a side including England great Gary Lineker beat Sampdoria 2-0 in the European Cup Winners' Cup final.

The crowning glory came at Wembley three years later with that first European Cup win. Ronald Koeman's extra-time free-kick at Wembley earned a 1-0 win - again over Sampdoria - for a team built around the talents of Guardiola, Michael Laudrup and Hristo Stoichkov.

In a silver-lined eight-year career as Barcelona coach, Cruyff claimed 11 trophies, including four La Liga titles. This was a visionary who could put his ideas into practice on and off the pitch.

Even in retirement, Cruyff remained a keeper of Barcelona's flame when it came to tradition and playing style - his word often regarded as law.

When people describe football as "The Beautiful Game", Cruyff is one of those who helped create this image.