It is fair to say Newcastle Falcons have never had a fly-half quite like Andy Goode.

Jonny Wilkinson was a one-off superstar, Jimmy Gopperth a likeable Kiwi with a metronomic boot - both devotees to diet and preparation - but Goode's maverick qualities have swiftly made him a cult hero.

Already 'retired', the 35-year-old returned to the professional game to answer the Falcons' injury crisis in late December with a slightly bigger waistline, but all of the talents that brought him 17 England caps.

That stint will come to an end on Sunday, after Newcastle's home game with former club Wasps.

"I've enjoyed every minute, the boys have been great and the fans have taken me in as one of their own," he told BBC Look North.

"But my contract is up, and I shall drift into retirement." 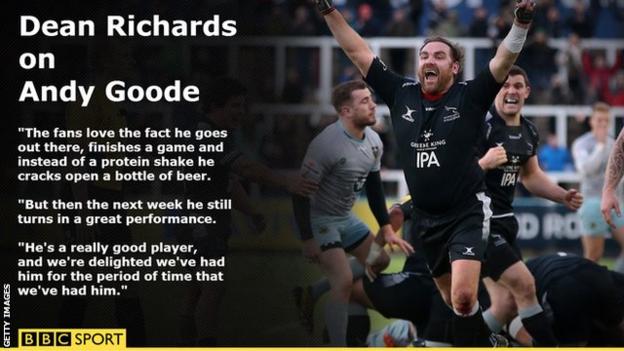 Goode has helped the Premiership's most northerly outpost to impressive wins against Harlequins, Leicester and Northampton during his time at Kingston Park.

His fitness might not be up to the levels of his team-mates, but the old class remains.

"I've put on a bit of weight especially during my retirement," chuckled Goode. "The shirts are getting tighter.

"Players are bigger in different ways, and players are tight on nutrition and secure in what they eat.

"But, from what I lack in physical expertise and fitness, I have got a fair bit of experience in understanding how the game works, the know of the game and hopefully how to win games which I have been able to do.

"At home we play in black shirts and black is slimming so it's all good."

Goode's appeal with supporters was heightened by his personality, his unwillingness to trade in the old-school habits such as a hard-earned beer or stodgy meal after a tough Premiership battle.

However, without the Falcons' good results, there would have been no successful comeback.

"It's no good enjoying a beer when you're losing," he added. "We play the game to win. It's what you train hard for.

"That enjoyment, buzz and the feeling you get post-game from winning - you can't replicate that anywhere else in life.

"Having a beer, being with your mates, the lads you go into a game with. It's important to enjoy the wins."

Director of rugby Dean Richards admits he was not convinced initially when owner Semore Kurdi mentioned the available Goode as a potential recruit.

Despite that initial reservation, the decision to hand him a deal has been justified.

"I couldn't have 15 Andy Goodes in the team," he said. "We'd get run over all day long but you can accommodate someone like Andy - we have guys who look after him on the field.

"But, saying that, it's more then compensated by the way he controls a game that outweighs any misgivings.

"The fans love the fact he goes out there, finishes a game and instead of a protein shake he cracks open a bottle but then the next week he turns in a great performance."

And it it a Goode future?

Since hanging up his boots initially, Goode has proved popular on television rugby union coverage with his self-deprecating humour and insight into the game.

Giving up playing for good will give him more time with his family, and the chance to enjoy the sport away from the grind of tackling and more importantly being tackled.

"I've proved a few people wrong," he said. "I don't think there will be many strength and conditioning coaches who are too happy with me coming out of retirement and doing reasonably well.

"But I was at Exeter at the weekend doing the commentary and enjoyed the atmosphere, hearing the 'Tomahawk Chop' which you never enjoy as an away player.

"I'll never play at Exeter again, yet now I can be impartial, enjoy games and the atmosphere. Hopefully now with the broadcasting work I'll be staying in within the game and doing it with a smile on my face."