Romania and Georgia should be given a chance to play in a revamped Six Nations, says outgoing World Rugby chairman Bernard Lapasset.

The Frenchman wants promotion and relegation to be introduced in the tournament - a suggestion backed by Romania's Welsh coach Lynn Howells.

"We need to change the format of the Six Nations championship," Lapasset told Le Figaro.

"This competition should open, either direct [promotion] or via a play-off."

A play-off would be between the team finishing bottom of the Six Nations and the winners of the second-tier European Nations Cup, which Georgia won this year.

Howells, whose Romania team lost in a play-off to the Georgians, supports Lapasset's idea.

"I think he's correct," said Howells, who was caretaker coach of Wales in 2001.

"Ninety percent of the implications that everybody is concerned about are finance. I think a play-off is probably the fair way to start it."

Italy were whitewashed in this year's tournament - but Scotland, Wales and France have all finished bottom.

Lapasset, who will be replaced by England's Bill Beaumont as World Rugby chairman, said change was important to "give hopes for these teams". 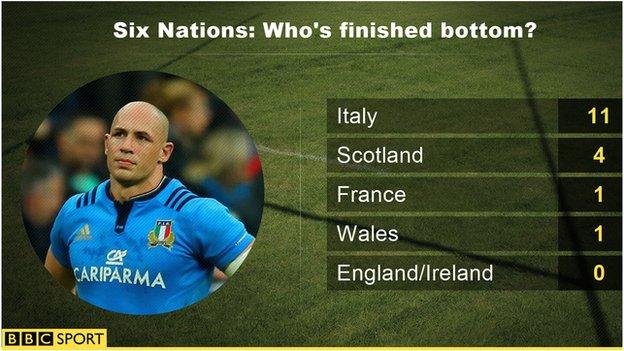 Romania won one of their four World Cup pool games last year, and Howells believes his side can only progress if they face tier-one teams more often.

"Romania have been pretty consistent in getting to the World Cup and the only time we play against a tier-one nation is when we get there," he told BBC Radio Wales.

"The one thing you can see is that we are improving in the situation that we're in, but to take the next step we have to play consistently against these teams.

"The big problem is that these tier-one nations don't give you the opportunity to play against them."

Howells says World Rugby is attempting to ensure Romania and Georgia get the same opportunities to face tier-one nations as the likes of Fiji, Tonga and Samoa.

Georgia will meet Scotland in November 2016 while Romania will face Italy in 2018.