London Irish back row Blair Cowan says they are fighting for their "livelihoods, reputations and families" in their Premiership survival bid.

The Exiles are four points adrift of 11th-placed Newcastle ahead of Sunday's meeting between the two clubs.

Irish know relegation could hinge on the result at Kingston Park, with only three games remaining in the season.

"You get a taste of the Premiership and you never want to leave. It's the most intense competition," Cowan said.

"I'm sure if you ask a lot of the boys who've come here from the southern hemisphere, they'd agree."

Scotland international Cowan, 29, has scored two tries in 13 Premiership appearances for London Irish this season, including one in their last victory against Gloucester.

"It's definitely about more than just playing in the Championship to fight for," he told BBC Sport. "It's our livelihoods, our reputations and it's our families. That's a massive motivator.

"We're under no illusions of the harsh reality if we lose this weekend. But we can't really focus too much on what the result is going to do, we've got to focus on ourselves and our roles."

London Irish winger Alex Lewington is likely to make a return from injury for the game, while prop Ben Franks could also feature for the first time since January. 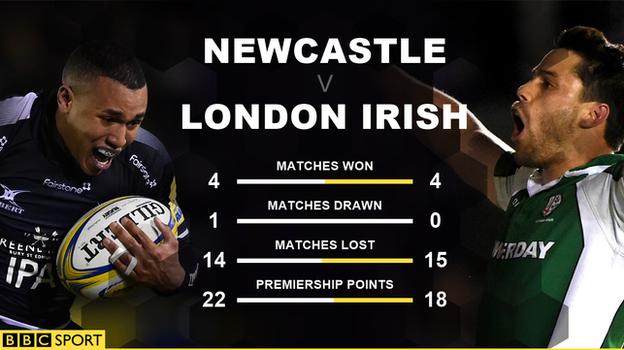