Leeds Rhinos legend Kevin Sinfield has announced he will retire from rugby at the end of the season.

The 35-year-old switched codes from league to join union side Yorkshire Carnegie last November after leading the Rhinos to the treble.

"I have always said that some day I will need to get a proper job and that day has now come," Sinfield said.

The former England skipper, who finished second in BBC Sports Personality of the Year 2015, will retire after Carnegie's Championship play-off campaign.

Bryan Redpath's side face Doncaster Knights in a two-legged tie with the winner to play Bristol or Bedford for a place in the Premiership.

Sinfield, capped 27 times by his country in the 13-man code, said: "I have been privileged and deeply honoured to have enjoyed a 20-year career as a professional rugby player and to retire, on my own terms rather than through injury, is something I feel lucky to be able to do. 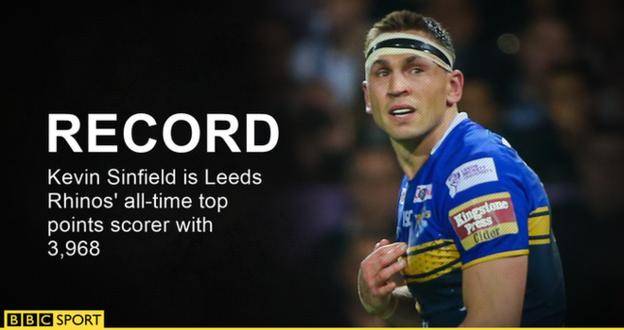 "I have thoroughly enjoyed the last seven months with Yorkshire Carnegie and I would like to thank the coaches, players and supporters for making me feel so welcome.

"I have always gave total commitment to every team I have ever played in and therefore I have decided to hang up my boots at the end of this season."

Sinfield made his Championship debut for Carnegie in November and has scored 117 points in 16 appearances in all competitions.

He admitted last month that he would miss playing rugby league "every day for the rest of my life" and that he had under-estimated the differences between the codes.

"It was originally an 18-month deal but, having done 18 months of rugby straight, I feel now is right time to step back and I think it's worth saying that next four weeks could be really special - we've got a big game this weekend," Sinfield added.

"It was a huge temptation to stay on and anyone who's had to make this decision to retire from professional sport will know it's a difficult one.

"There's a lot of ifs, buts and maybes and I hope I can walk away from Carnegie knowing we've done a great job and we get promotion."