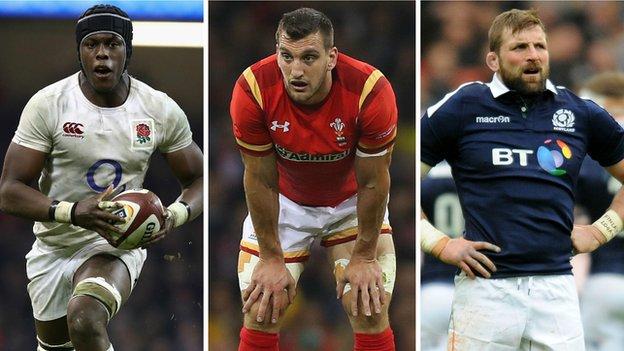 These men are the turnover kings at the ruck.

Rugby commentators call them jackals, but what they really mean is hyenas - aggressive beasts with huge upper bodies who spend half their lives buried up to their waists in the bloody carcass of the ruck, never happier than when ripping the ball from the grasp of a downed opponent.

Historically the hyenas have been open-side flankers - think outstanding Australian David Pocock, who played most of his career in the seven shirt before moving to number eight for the Wallabies.

But as the game has developed apace, winning turnovers is a skill that is increasingly being distributed throughout the team.

The former Wales captain has been a man revitalised after shedding the responsibility of leading the team.

Packing down on the blind-side in this Six Nations he has won three turnovers in the two games so far and is a constant menace at every ruck.

Warburton learned from former Wales flanker Martyn Williams, who was a master of the art, and has significantly bulked up over the years to be able to take the inevitable pounding players face when attempting to force turnovers.

The Ireland blind-side is having a superb Six Nations both with ball in hand and in defence.

A squat 6ft 1in - he packs getting on for 18 stone into that comparatively compact frame - getting over the ball at the ruck is just another of the skills he executes very well.

Stander is averaging a turnover a game over the past two Six Nations and is always looking to give his team an advantage - he views this as another area for him to exploit in order to wrest back momentum for the men in green.

Back in the day turnover specialists were rarely towering next-level athletes with the height and heft to play second row - but this is 2017 after all and Saracens forward Itoje is enjoying redefining the possibilities, having shifted from lock to blind-side for England this season.

At 6ft 5in and with a correspondingly higher centre of gravity, he should be - comparatively - easy to shift off the ball, but not only is he outstandingly quick to get in position at a ruck, once he is there he is impossible to blast out of the way.

Last season he was borderline for me at the breakdown as, rather than support his own weight legally, he flirted with illegality by putting his elbows on the ground to support himself, and although he has improved a little bit this season he still pushes his luck and can improve.

John Barclay has been rewarded for his influence by being handed the Scotland captaincy for Saturday's game against Wales.

The versatile back-rower - he will start at six at Murrayfield - missed out on the 2015 World Cup despite being in the top three for turnovers in the Pro12 the previous season.

The 30-year-old Scarlets player has persevered and his ability to turn over ball and force penalties at the breakdown will be key if Scotland are to end their long losing run against Wales at the weekend.

The second of Ireland's multi-purpose back row hunter-killers along with Stander, O'Brien was outstanding on the opening weekend in the defeat by Scotland.

Despite not having played for a month he was at the heart of their fightback and added two turnovers to his tally of tackles and metres made, before the Scots made the game safe once the Tullow Tank had finally run short of power after 65 minutes and been replaced.

The 30-year-old flanker epitomises the 'farm strength' that those raised on a farm accrue as they grow up, and the years spent chucking bales around are all too evident when he get his mitts on the ball and refuses to budge.

Remember what I said about the game changing? Towards the end of his career former Ireland centre Brian O'Driscoll had become so adept at the breakdown he was like another open-side playing in midfield when it came to winning turnovers and penalties at the ruck.

England winger Nowell is a similar size and build, and that stocky power means he was equal top of the turnover charts with seven in last year's Six Nations.

It is always good to see a back in the turnovers-won rankings and keep an eye out for Nowell over the next three games as he proves it's not just forwards who can be influential in this area.

Who has Guscott missed out?

Whether you agree or disagree with Jerry's choices, why not rank his picks in the order you think they should be in using our interactive tool below.

190 comments
Back to top
unknown