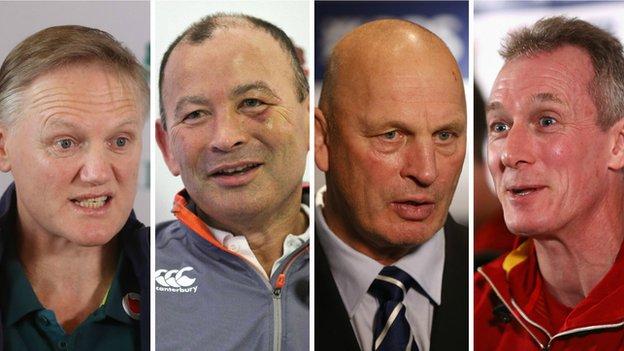 As the start of the Six Nations nears, the respective coaches spent as much time talking about who wouldn't feature in the opening weekend as would.

The duration of Ireland fly-half Johnny Sexton's absence was a theme for coach Joe Schmidt, while England counterpart Eddie Jones' - sporting a shiner of his own - updated the media on his host of walking wounded.

Sexton will miss Saturday's meeting with Scotland with a tight calf, but Schmidt raised the prospect that the 63-cap Leinster fly-half could also miss Ireland's second match against Italy on 11 February.

"Realistically, Johnny is an outside chance for Italy. He's probably played about 82 minutes in the last eight test matches," said Schmidt.

"In the three Six Nations I have been involved in, Johnny has dominated the number 10 position so we're still hopeful that he can come back in and do that for us."

Paddy Jackson, who deputised for Sexton in Ireland's autumn Test win over Australia, has been given another chance to stake his claim, while flanker Sean O'Brien is fit again at openside.

Daly starts on wing ahead of Nowell

Before taking on the England role, Jones had suggested that flanker Chris Robshaw was short of international class.

But, with Robshaw out for the tournament with a shoulder injury, Jones admits Maro Itoje, who has been switched to six from the second row, has a tough task to match up to the Harlequin in the opening match against France.

"Itoje has got big shoes to fill," said Jones. "Chris Robshaw has been one of our integral players with his work-rate but Maro has trained well in that position and we believe he can make a really good fist of it.

Prop Joe Marler, meanwhile, has claimed that drinking two pints of milk a day is behind his rapid recovery from a leg fracture that was expected to rule him out of the team's first two fixtures.

"Your mum always says milk is really good for you and you don't really believe it until you need it because you've got a broken leg, so I just drank loads of it," he said.

"I drank two pints a day and it's something I'll keep doing because it's really tasty."

Cotter is keen to keep his Scotland players' feet on the ground after winning four out of five of their matches since last year's Six Nations and coming within a point of Australia in their solitary defeat.

"Can we win the whole thing? I think the trap is every year that Scotland get talked up," said the New Zealander.

"We are realistic. We know which teams are ranked ahead of us, we know what the rugby hierarchy is at the moment. It's up to us to change that."

Hooker Fraser Brown will make only his fourth start ahead of 102-cap Ross Ford and Cotter says that the Glasgow man's defensive skills swung selection.

"Fraser is very good defensively and close around ruck time. We know Ireland go to one-pass or two-pass plays and we need to be robust around that area."

With Wales' opening match followed six days later by defending champions England's visit to Cardiff, interim head coach Howley has put his side through two full-contact training matches to get them match ready.

Welshman Nigel Owens, who took charge of the 2015 World Cup final, officiated the 50-minute, 15-a-side matches and Howley believes the approach has worked.

"There has been a lot of energy and enthusiasm over the past two weeks, and we are excited going into Sunday," he said.

Wales XV to face the Azzurri have collected a total of 677 caps and Howley believes that experience is crucial.

France coach Guy Noves will give 22-year-old Bordeaux scrum-half Baptiste Serin his Six Nations debut and only third start in the team against England on Saturday.

"We're convinced we can count on him in the future but we want to try him out in a difficult situation." said Noves.

"If we trust him, he has to show his qualities in the toughest situations. To only play in the lesser matches, that doesn't seem smart to me."

Maxime Machenaud drops to the bench despite starting in each of France's three autumn Tests.

Former Harlequins head coach Conor O'Shea, who took charge in June, wants his Italy side to build on their first-ever win over South Africa in November.

"We want a great, great performance this weekend to make everyone understand that we are on the right track," said O'Shea.

"It is possible to change our history. Sport is very strange and can very quickly change."