England broke Welsh hearts with a late try from Elliot Daly snatching an unlikely victory in Cardiff and stretching their winning run to 16 matches.

Liam Williams' slicing first-half try and 11 points from the boot of Leigh Halfpenny looked to have sealed a merited home triumph, the Principality Stadium awash in song and celebration.

Defending Six Nations champions England had led through Ben Youngs' early try but were then bullied for much of a pulsating contest, their callow back row outmuscled and their attack imprecise.

But Owen Farrell's penalties kept them within two points and with time running out his long flat pass put Daly away down the left to escape Alex Cuthbert's despairing tackle and dive over in the corner.

It was a poor clearing kick from Jonathan Davies that gifted England that final chance, and Wales will be left ruing that lapse, just as the visiting supporters celebrated it with glee.

With home matches against Italy and Scotland to come Jones's men have a realistic shot at setting up another Grand Slam tilt, disappointing though they were for much of this contest.

Wales were better in most of the key areas, their back row of Sam Warburton, Justin Tipuric and Ross Moriarty exposing England's comparative lack of experience.

Dan Biggar out-shone his opposite number George Ford, as impressive with ball in hand as he was with his kicking game, and picked off an interception deep into the match that appeared to have been pivotal.

Yet again it was England's bench that saved them, although the men Jones has called his finishers were more rescue squad on this freezing Cardiff night.

Just as those replacements had changed the face of the narrow win over France at Twickenham a week ago, so they wrestled late control of a game that Wales had in their grasp.

Wales left points on the pitch in the first half, twice spurning kickable penalties, once to take a five-metre scrum which England then won, shortly afterwards kicking for the corner when the impeccable Halfpenny would surely have bagged the three points.

Skipper Alun Wyn Jones then knocked on with only the comparatively diminutive Youngs in front of him and with an overlap left, and in a game as tight as this it will be one more regret on a night of what ifs and should have beens.

The streak goes on - just 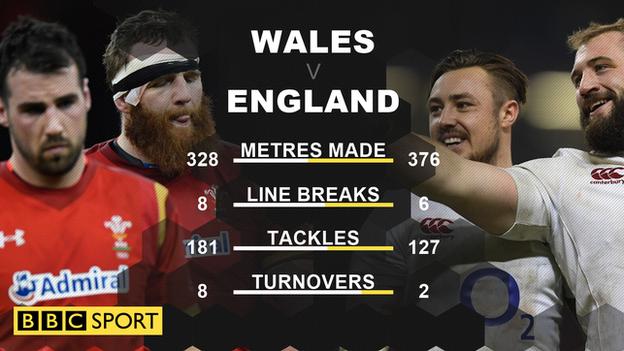 England's opening try had spoken of initial superior precision and control, the men in white going through 26 phases before Youngs burrowed over.

Only Farrell's missed conversion and Daly's penalty miss from long range kept them from enjoying a more comfortable lead.

That superiority was short-lived. Williams cut a sweet inside line off Rhys Webb's pass, England's defence suckered by decoy runners.

And sustained Welsh pressure in the second half really should have brought reward, Jones so concerned he replaced his skipper Dylan Hartley on 46 minutes and threw on James Haskell shortly afterwards.

England still could not find their rhythm, Mike Brown wasting one attack by kicking the ball out on the full under little pressure, Jonathan Joseph ending another with a pass sent straight into touch.

But as Hymns and Arias rang out around the steep stands, Ford fielded Davies' kick 30 metres out, Farrell spotted Daly outside him and the winger accelerated past the unhappy Cuthbert to keep Jones's record-breaking streak alive.

Reaction from the camps

Wales captain Alun Wyn Jones speaking on BBC Radio 5 live: "Hopefully we answered some of the critics. We had a great first half. Yes we are disappointed, but the performance was there for 76 minutes. We will take huge belief from this."

England head coach Eddie Jones speaking on BBC Radio 5 live: "I think we have used all of our get out of jail cards. I never think we are going to lose, but we don't want all our games to be that tight."

What did the pundits make of it?

Ex-Wales fly-half Jonathan Davies on BBC One: "I felt that England looked far more threatening with ball in hand. When the opportunity came, they took it. They were so clinical in the opportunities they had."

Ex-England hooker Brian Moore on BBC One: "It shows again that if you do not put this England side away when you are on top they will make you pay. They were outplayed for long periods but when it came down to taking the opportunity from a poor Welsh kick, they found a way to win."