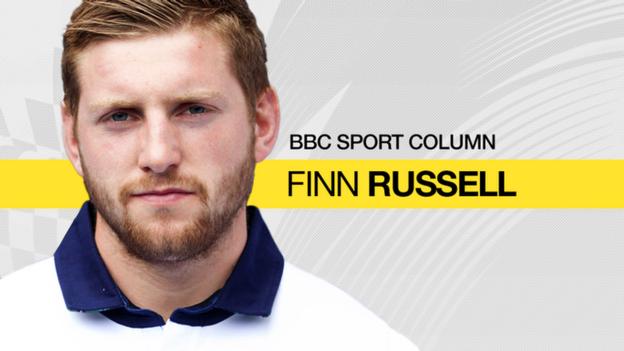 As with any defeat, we look back on the loss to France in Paris and there are a number of things we wish we could have done differently.

Of course, the one moment I would really like to have over again is my conversion after Tim Swinson's try, which I managed to put under the bar from in front of the posts.

I rushed the kick and unfortunately as I ran up to strike the ball it fell off the tee. It cost us an easy two points, which was disappointing. It's a lesson learned - always make sure the ball is properly set up on the tee before taking the kick.

I'm not sure if that miss had any bearing on the final outcome. France elected to go for goal with a couple of penalties in the second half rather than kick for the corner and I did wonder during the game whether they might have made different decisions had I kicked that conversion to give us a five-point cushion. It could have changed the game but it's hard to tell.

It was a brutally physical game. There were a lot of sore bodies after it, a lot of injuries. The big negative for us - aside from the result obviously - was losing Greig Laidlaw and Josh Strauss for the rest of the tournament.

As captain, Greig has a massive impact on the team, on and off the field. He's a great guy to have around and not having him this week has been tough. He's been there since I've been part of the Scotland squad and that's the case for a lot of the boys.

We've got a strong group of leaders in the squad. Obviously Greig was the main one so with him being absent other guys in the squad have had to step up this week. I'm not the sort of guy who likes standing up and speaking in front of a group of people but on the pitch your scrum-halves and fly-halves need to be leaders.

I've felt this week I've had to do some of what Greig does in giving a little bit of direction to others.

Ali Price, Henry Pyrgos and I are used to talking things through at Glasgow about what is working and what isn't, so in the absence of Greig we have tried to come together as a group to chat things through.

The good thing is the three of us and Duncan Weir have all played together a lot so we'll have a good 9-10 connection whatever the half-back combination is at any point in the game.

Wales have been impressive in this Six Nations and we know what a huge challenge they will provide at Murrayfield. They were very good against Italy and were unfortunate not to beat England in Cardiff, losing in almost the last play of the game. They are a quality team.

It will be another very physical game but there will be a few things the Welsh will throw at us that France and Ireland didn't. We'll have to be smart as well as physical.

One positive we can take from the France game is maintaining the clinical edge we have brought to our game in recent times. Our chance conversion rate in the tournament so far has been good and we'll need to take our chances when they come along on Saturday because Wales are not the type of team who allow you too many glimpses of their try-line.

Our record against Wales has been mentioned in the camp a few times this week. We've not beaten them since 2007 but our focus is really on looking ahead rather than at results from previous years.

The middle game of the championship is always a crucial one. After losing to France we were disappointed so this is a key game for us to get our tournament back on track.

Wales are one win from two as well so they are in the same situation as us. They'll have been gutted after the England defeat having come so close to winning. There is a lot riding on this match for both teams.