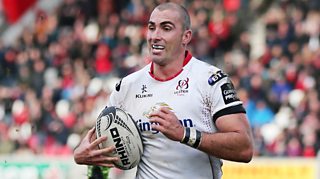 Ulster travel to Italy with renewed confidence after consecutive Pro12 victories to get their season back on track.

The province lost nine games out of the 13 to fall from first to sixth place in the table but have some forward momentum after securing bonus point wins over Edinburgh and Glasgow in the last two weeks.

South African Ruan Pienaar marked his return from a six-week lay-off with a knee injury to score a special team try which he said will give the team confidence ahead of Sunday's game away to Zebre.