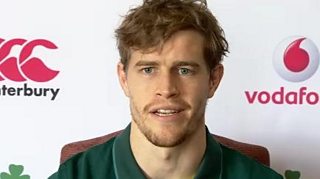 Ireland wing Andrew Trimble says Ireland must match France's physicality if they are to win Saturday's Six Nations game between the sides at the Aviva Stadium.

"We must be accurate in implementing our gameplan, hold onto the ball and take it through the phases," said Trimble, who will start the game on the replacements' bench.

The Ulster back adds that his provincial team-mate Paddy Jackson is disappointed to have been dropped to the bench in favour of Johnny Sexton, but adds that both should have a part to play against the French.