Scotland will attempt to end their decade-long winless streak against Wales with a team missing five key men as the Six Nations resumes this weekend.

Not since 2007 have Vern Cotter's men won a Six Nations match against Wales, with the average margin of defeat 15 points in that period.

Ireland have recalled Lions fly-half Jonny Sexton as they look to re-establish themselves in the title race with a win over a resurgent France.

And Sexton's main rival to be the Lions' 10 this summer, Owen Farrell, will lead unbeaten England out against the Azzurri at Twickenham on Sunday as he wins his 50th cap in arguably his most impressive championship yet. 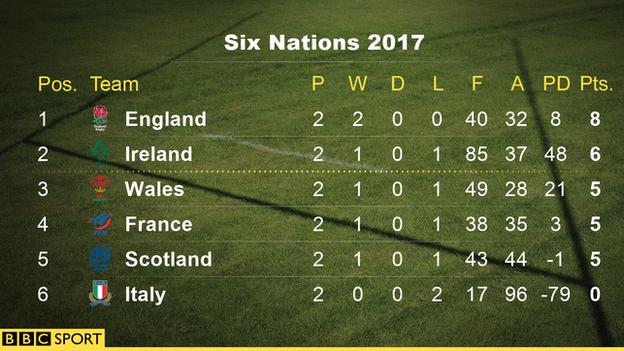 Farrell has a new partner at outside-centre in former rugby league star Ben Te'o for a fixture that England have never lost, coach Eddie Jones content to try out new combinations against at Italy side on a nine-match losing run in the Six Nations.

With James Haskell back at flanker after coming off the bench to great effect in the wins over France and Wales, it is a more direct, muscular selection from Jones, blessed with a greater depth of talent than either Scotland or Wales.

In an entertaining, free-scoring tournament so far, the clash at Murrayfield is pivotal to two sides who have shown both signs of rebirth and flashes of old flaws thus far.

With one win and one defeat apiece, Saturday's early kick-off will go a long way to defining the season not only of the two sides but of their coaches, Cotter in his last campaign in charge, Rob Howley once again in a caretaker role as Warren Gatland focuses on Lions preparation and selection.

The fixture has often produced classics - not least a Wales win in 1988 garlanded by superb tries from Jonathan Davies and Ieuan Evans, and the 31-24 thriller in 2010 when Wales were 10 points down on 76 minutes.

And despite recent history it is arguably the hardest of the third round matches to call, although the loss of Scotland's captain and place kicker Greig Laidlaw to injury and the return of talismanic winger George North to Wales's ranks may prove pivotal.

Ireland ran up 63 points against Italy in Rome a fortnight ago, and after a chastening opening-day defeat in Edinburgh a victory over France would keep their hopes of a third Six Nations title in four years alive.

France have lost their last four away matches in this competition but led England until late at Twickenham at the start of the month, and came past Scotland in Paris with a blend of power and guile that hinted that their long statistical and stylistic slump may be coming to an end.

While the return of captain Rory Best after a stomach bug will be welcomed in Dublin, Sexton's return is not without controversy.

He has played very little rugby this season, this most physical of fly-halves once again dogged by injury, and in his absence Paddy Jackson has appeared liberated from the unflattering comparisons of old, kicking 12 of his 13 goals to be leading points scorer in this year's tournament.

Farrell, meanwhile, has shown a craft with ball in hand this winter to match what was always considered his defining strength, that ability from kicking tee across the pitch and no matter what the pressure.

It was his long, flat pass that sent Daly away for the late try in Cardiff a fortnight ago that kept England on course for a final-day Grand Slam decider in Dublin and maintained the extraordinary 15-match unbeaten run under Jones.

England have not yet fired fully this year, coming from behind in the final quarter against both France and Wales.

But what is ominous for Italy is that strength in depth on the replacements' bench and the impact it is consistently having in big matches.

So many options does Jones have that he can afford to leave Jonathan Joseph, scorer of three tries in the corresponding fixture last year, out of his match-day squad altogether.

And with star prop Mako Vunipola returning to the bench after recovering from a knee injury, anything else than a heavy defeat would count as a victory of sorts for Italy's Irish coach Conor O'Shea.