England continued their 100% start to the Women's Six Nations with a five-try home win over a spirited Italy side.

Hooker Vicky Fleetwood completed her hat-trick before Italy fought back with two tries either side of a red card for England skipper Katy McLean.

Poppy Cleall was also sin-binned, but England avoided a nervy finish to win.

The favourites looked to be cruising towards an emphatic third win from three matches in this year's tournament, until some indiscipline after the break allowed the visitors to bring some respectability to the scoreline at Twickenham Stoop.

World champions England, who have not won the Six Nations since 2012, move top of the table above Ireland who play France on Sunday. 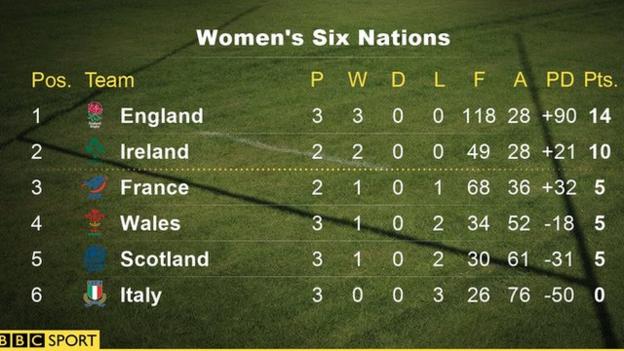 Few predicted anything other than an overwhelming win for the fully professional home side, the question seemingly being whether England could rack up more points than the 63-0 win against Wales in their previous game.

They certainly did not expect the Azzurri, bottom of the table after losing to Wales and Ireland, to take an early lead when Stefan picked up a neat chip to finish.

England levelled 10 minutes later when Kay Wilson touched down in the left corner, taking the lead shortly after with almost a carbon copy try from Amy Wilson Hardy in the opposite corner.

After Italy second-rower Elisa Pillotti was shown a yellow card for a high tackle, England used their numerical advantage to run in two more tries through Fleetwood before half-time.

England would have been confident of going close to the 11 tries scored against the Welsh when Fleetwood crossed again shortly after the restart.

But Italy fought back as they carried on taking the game to the hosts.

Skipper Sara Barattin finished off a chip and chase and, after McLean was dismissed for a dangerous tackle and Cleall was yellow-carded for a high challenge, full-back Manuela Furlan finished off a flowing move for Italy's third try.

"It was amazing to get 80 minutes under my belt after coming back from injury and I can't thank my team-mates enough for getting me over the line.

"It was down to the forwards grinding out the win and we stayed resilient to the end even though it didn't always go our way.

"We stuck it out and we got the bonus-point win which we wanted."

"I'm pleased we got the win and got the bonus-point win, but it was still frustrating.

"We didn't get to where we wanted to get in our performance - but we dug in well and held our defensive shape in the final 10 minutes.

"All credit to Italy, they were outstanding. "