Iain Henderson's yellow card proved costly as the Hurricanes clawed back a 14-point deficit to draw with the British and Irish Lions in Wellington.

The lock, who along with Courtney Lawes was otherwise impressive, was sin-binned after 65 minutes for a dangerous clear-out on Jordie Barrett.

A Tommy Seymour double and George North try had put the Lions in control, but down to 14 men they shipped two tries.

The Lions will be back at the Westpac Stadium on Saturday for their second Test against New Zealand, which kicks off at 08:35 BST.

In their final midweek game of the 2017 tour the Lions led 23-7 at half-time courtesy of opportunistic scores from wingers Seymour and North, either side of Callum Gibbins' short-range try for the hosts.

The Super Rugby champions scored within a minute of the restart through Ngani Laumape, but a third try of the tour from Seymour should have set the Lions on the way to victory.

But, when Ireland's Henderson was sent from the field with the scores at 31-17, the Canes went on the attack and Wes Goosen and Vaea Fifita punished the Lions with converted tries to level the scores.

With Warren Gatland admitting the Lions are set for a 'shake up' in the pack for the second Test, second rows Courtney Lawes and Iain Henderson probably had the most to gain from this game.

George Kruis and Alun Wyn Jones failed to impress in the Lions' first Test defeat by the All Blacks but the midweek locks were imperious - bar Henderson's lapse - in Tuesday's draw.

Ulster's Henderson got a vital assist for the Lions' second try as his deft off-load set up North, but the 25-year-old also had an impressive game at the breakdown, securing a vital turnover at the end of the first half.

But his yellow card may ultimately have cost the Lions victory, giving Super Rugby's top try-scorers the chance to do what they do best.

Jordie Barrett picked out substitute Goosen on the wing with a fine miss-pass as the Lions were outnumbered.

And the Hurricanes then turned to their forward pack as the Lions' depleted line-out saw the NZ outfit secure good ball, with Fifita crashing over the line.

Englishman Lawes - who will have made fewer headlines than Henderson - also had an impressive game, carrying well and securing decent line-out ball.

He was hauled off with 30 minutes to play, which could well be an indication of Gatland's thinking.

There were also gains to be made by the likes of George North, perhaps a surprise omission from the first Test squad in Auckland.

The Welshman crossed for a classic winger's try, despite playing much of the game in the centre following an early injury to Robbie Henshaw.

Forced into a partnership at inside centre with Jonathan Joseph outside him, North popped up on Henderson's shoulder in the first half and accelerated away from the cover defence for his first try of the tour.

He could have had two tries, but for a foot in touch. It was a positive audition from a player out of position, whose explosive power and ability to make yards beyond the tackle could be used by Gatland on Saturday.

Scotland winger Seymour, despite not being a real threat to the Test team, also profited in Wellington in what was probably his final game in a Lions shirt in New Zealand.

After a mixed few weeks, his double on Tuesday means he is now the leading try scorer on the 2017 tour. 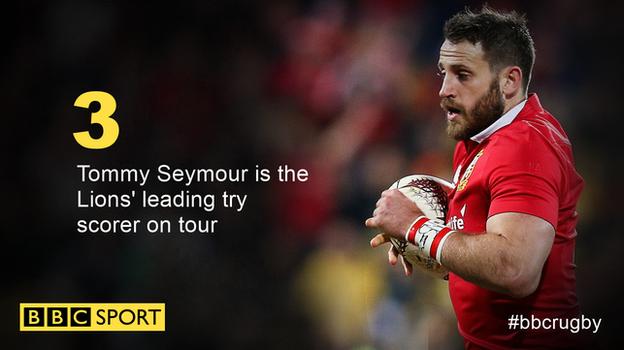 What did the boss make of it?

Lions head coach Warren Gatland: "The penalties we gave away were a bit soft and they allowed them back into it. We felt like we played some good rugby, but that yellow card [to Iain Henderson] was a penalty to us and it ends up being a penalty reversed.

"We had Henderson off the field for 10 minutes and conceded 14 points. To me that's the game in a nut shell."

Lions captain Rory Best: "You can't fault the effort, perhaps our composure a little bit. I don't know if it was a penalty but Iain Henderson was tremendous tonight and we have to be bigger than a yellow card."

"We've seen countless times this tour that you can't switch off for a moment, let alone 10 minutes.

"Iain Henderson covered what seemed like every blade of grass. It's one thing to have a big engine and workrate, another thing to have those qualities and be so effective with your involvements. Before his yellow card Henderson had been comfortably the best player on the pitch."

823 comments
Back to top
unknown