British and Irish Lions coach Warren Gatland has made his "last roll of the dice" in picking both Johnny Sexton and Owen Farrell for Saturday's second Test against New Zealand, says former Wales fly-half Jonathan Davies.

Sexton and Farrell have played only 74 minutes together as a 10-12 axis in the eight previous matches on the tour.

Despite being selected in the squad as a fly-half, Farrell replaces Ben Te'o at inside centre, resuming the midfield role he plays for England.

"It is a worry that they have not played together more. I'm surprised," Davies told BBC Sport.

Gatland said the pairing of Ireland playmaker Sexton and Farrell would make the Lions more creative and clinical.

"Both have played well and it gives us that attacking option in the 10-12 channel," Gatland said.

"We created opportunities in the first Test and there were a few that we didn't finish."

Gatland made a big call in 2013 when he dropped Brian O'Driscoll for the decisive Test match in the series win over Australia.

Former England fly-half Paul Grayson backed Gatland's selection of Sexton and Farrell but said he would have "given them two or three games together". 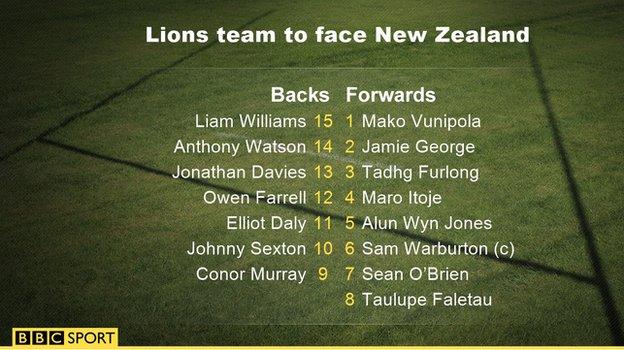 Wales lock Alun Wyn Jones keeps his place in the starting XV despite a difficult outing in the first Test and strong midweek performances from Courtney Lawes and Iain Henderson having given Gatland "food for thought".

Lawes, CJ Stander and Jack Nowell are among the replacements after playing in the 31-31 draw with Hurricanes on Tuesday.

Meanwhile, Robbie Henshaw and George North have been ruled out of the rest of the tour.

Ireland centre Henshaw (pectoral) and Wales wing North (hamstring) were injured against Hurricanes and will return home after Saturday's match.

Analysis - 'If he loses on Saturday, he will get stick'

"You have to be a bit creative to beat the All Blacks because they will always score points. The first Test selection was a bit odd for me, picking a very attacking back three and not the most creative midfield.

"It is the 10-12 combination that I would have liked right from the start, but they have not really had the chance to play together in the warm-up matches.

"It is a worry that they have not played together more. I'm surprised. If this had been Gatland's ploy from the start of the tour I would have played them a bit more before the Tests.

"He made a big call in the third Test against Australia four years ago - dropping Brian O'Driscoll. That had a positive outcome, but if he loses on Saturday, he will get stick."

"I didn't expect it from Gatland because of the make-up of his teams historically.

"He has always preferred the physical presence of Jamie Roberts ahead of the more creative Scott Williams for Wales.

"I would have gone with Sexton and Farrell as my 10-12 combination before the tour.

"It gives you better ability to move the ball, more decision-makers on the pitch, the ability to paint different pictures in attack and more of a kicking game to keep the pressure on the All Blacks.

"But I would have given them two or three games together to build their flow.

"Having not had them together in the warm-up games, you are going to do your finding out in the Test match, which is a massive, massive ask."

"There are three players [Kruis, Lawes, Henderson] who are on tip-top form and he's gone with the experience. Ok, that's a fair enough shout.

"Sometimes in games you do tweak the form argument a little bit because of experience, but this is a Lions Test match. It's not an international, it's not a club game, does experience now stand for too much?

"They're 1-0 down, they're lacking physicality, they're lacking players who can really throw it to the All Blacks for a sustained period of time and win break-down ball, as well as the collision and there are players that are doing that better than Alun Wyn Jones."

"Nothing they [All Blacks] do is rocket science. It's stuff that is very basic, but it's been honed and honed and honed to the point where they do it more consistently and at a higher level than any other team.

"You look at the try that the Lions scored [the opener in the first Test], it was absolutely fantastic, O'Brien's try, some fantastic skills.

"So it's not like the Lions players are incapable of doing things that the All Blacks can do. It's just that the All Blacks, through practise and repetition, do it at a much more consistent level a lot more often than other teams. That's their point of difference.

"It's not something that's beyond any other player in the world in any other country, it's just that they are more consistent at doing it and that's really their strength at the moment."

Itoje will bring an edge - Gatland

The Lions lost the series opener 30-15 in Auckland, with Gatland citing a lack of physicality in the forwards. He has sought to address that with the inclusion of Saracens lock Itoje and Cardiff Blues flanker Warburton.

"You have to make the tough calls," Gatland said.

"We saw Maro's impact in the first Test and he will bring an edge and a physicality, as will Sam Warburton in terms of pressure on the ball."

While those changes were expected, Gatland has been reluctant to field Sexton and Farrell in the same midfield in the tour matches - although they have trained together since before the tour left for New Zealand.

"Both have played well and it gives us that attacking option in the 10-12 channel," Gatland said.

"We created opportunities in the first Test and there were a few that we didn't finish."

New Zealand have made two changes - Waisake Naholo comes in on the wing and Anton Lienert-Brown at outside centre.

Experienced Welshman Jones retains his place in the second row and will partner England's Itoje.

"It's a big game for him," Gatland said of Jones. "He was a bit disappointed with last week and how it went.

"He's pretty focused and pretty motivated. Normally in the past when he's had those sort of challenges he has really fronted the next game.

"He's trained well this week and I think he's looking forward to Saturday."

518 comments
Back to top
unknown