Jamie Roberts says he is "desperate" to regain his Wales centre place and play in 100 Test matches.

The 30-year-old Harlequin has 96 internationals to his name for Wales and the British and Irish Lions.

Roberts says he is focused on regaining his starting spot in Warren Gatland's team after spending most of last season on the bench.

"I've got to get in the squad first. It's a competitive position," he told BBC Wales' Scrum V programme.

Roberts had been Wales' first-choice number 12 since 2009, but lost his place after Australia exposed defensive frailties in the 32-8 victory in Cardiff in November 2016.

He made several appearances off the bench in the Six Nations - including a key try-scoring intervention against Ireland - and then missed out on British and Irish Lions selection for the first time in three tours. 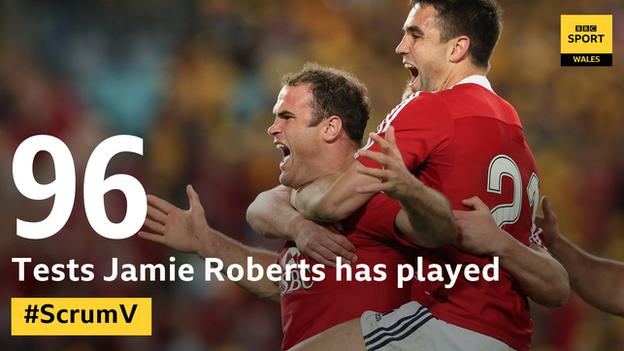 After captaining an inexperienced Wales in their summer wins over Tonga and Samoa, Roberts has his sights set on a century of caps.

"I think not many make it to 100 caps, but I'm very focused on the here and now and really delighted to get a couple of caps in the summer and really attacked this pre-season.

"I'm feeling the fittest I have in a long time. I'm being really diligent with my training and I suppose you have to be when you get a bit older, and recovery and all those little things which go into being a pro rugby player.

"I'm being extra diligent with that stuff and just want to make sure over the next few months now that I put in some good performances and really go for it. I'd love to be involved in November and in the future again."

It was Robert's uncharacteristically ineffective marshalling of Wales' defence against the Wallabies last season which he acknowledges cost him his position as Wales' first-choice inside centre.

"I was as disappointed as any player to lose my place," he added.

"I had a poor performance in that opening game in November and I paid the price for it.

"I didn't start for Wales from then until the summer.

"I'm desperate to get that 12 jersey back. It's what I'm working hard towards - you picture that when you go out and train for your club every week - that's what you strive for and you give it your all and the rest is out of your hands."

Four appearances for Wales in the autumn would see Roberts reach the landmark 100 Tests - if you include his three for the Lions - and gain him membership of the Rugby Centurions club. which currently has 53 members.

Another three after that and he would be the fifth player to win 100 caps for Wales.

Before then Roberts faces a tough start of the season with Harlequins, who face Wasps, Leicester, Northampton and Sale Sharks before starting their European Champions Cup campaign against La Rochelle.

"You do your talking on the field and that's been a huge focus this year," added Roberts.

"I'm delighted to be playing in the Champions Cup with Harlequins and looking to put in some big performances."