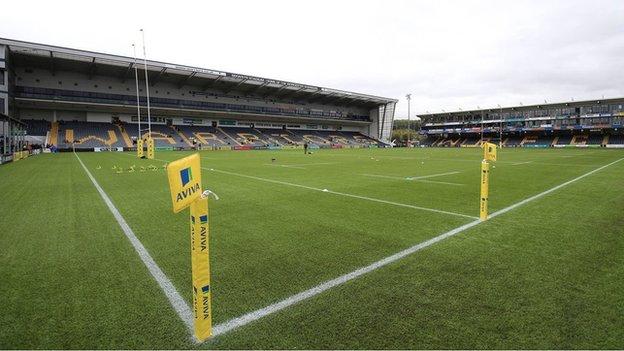 Worcester have made it clear that any prospective purchase of the club must involve them staying in the city.

Club chairman Bill Bolsover referred to a Wasps-style move away from Sixways as "a long shot" on Friday.

But the club's owners have now put out a statement categorically denying that they would leave Worcester.

"Sixways Holdings Limited will not risk the future stability of the club by allowing it to be moved to another part of the country," said Bolsover.

"Last week I was able to reassure supporters that it was highly unlikely that a new owner would relocate the club.

"I can now confirm that selling the club to investors who might want to move it away from Worcester is not something that Sixways Holdings Limited would consider.

"The Midlands is the prime location for the club to continue to engage and grow what is already a strong support-base in the area."

A condition of any sale would state that the club, who are currently bottom of the Premiership, must remain in Worcester.

'Crowds not what they should be'

Warriors have averaged home crowds of just over 7,000 in their five matches at the 11,500-capacity Sixways this season.

Saturday's gate of 6,081 for the 24-21 Anglo-Welsh Cup home defeat by Sale was their lowest of the campaign so far.

"Commercially we are doing OK," Warriors managing director Gus Mackay told BBC Hereford & Worcester. "But we are driven by crowd numbers, which we accept have not been what they should be.

"If we get some wins together, the crowds will come. Traditionally, our attendances have always increased as the season goes on."

They are currently in the hands of Alan Solomons at first-team level, while director of rugby Gary Gold, who is to leave at the end of the season to become USA coach, is back in South Africa on extended leave.

The short history of Premiership rugby at Sixways

Current shareholders Sixways Holdings Limited have been investing for a decade, having taken over when Warriors' main long-time benefactor Cecil Duckworth stepped back his involvement.

The old Worcester Rugby Football Club had a variety of homes in and around the city until they moved to Sixways in 1975, after which Warriors bought the freehold.

Worcester first won promotion to the Premiership back in Duckworth's heyday, under coach John Brain in 2004.

This is their third successive season - and 12th overall - in the top flight, interrupted only by relegation in 2010 and 2014.