Having led 17-5, their dismissals left Glasgow playing with 14 men for a quarter of the match.

They conceded a first-half brace from Kelian Galletier and a penalty try, with Jacques du Plessis also scoring.

Despite winning all 10 of their Pro14 matches this season, Dave Rennie's men have taken a solitary point from their three European games.

On Vern Cotter's return to Scotland, things were very straightforward, both for his Montpellier side and for Glasgow.

With two defeats each in the opening two rounds of the Champions Cup, neither could afford a third loss if they were to stand even the flimsiest hope of making a charge for qualification.

A win was not even enough, it had to be a bonus-point win, such is the amount of ground that must be made up on Leinster and Exeter.

Glasgow had the positivity of an early three points from Finn Russell's boot, then the negativity of losing Sam Johnson to injury, then the setback of shipping a try, inspired by Aaron Cruden and finished up the left touchline by the blind-side Galletier.

Rennie's team rallied, and rallied impressively. Two visits to Montpellier's 22 in the next dozen minutes and two brilliantly executed scores. The first came off an Ali Price snipe, Peter Horne running a dummy line that opened enough space and created enough confusion for Sarto to step Jan Serfontein and go over.

The second was even better. With Montpellier on a run of seven penalties conceded in 20 minutes, Glasgow took advantage. It was Russell's cheek that created it, the fly-half taking it close to the try-line, drawing in big Nemani Nadolo and Du Plessis before unloading out the side door for Turner, who crashed over.

Russell put over both conversions and Glasgow had a 17-5 lead. Everything turned close to the half-hour with Turner's yellow card. It was ruinous to the Warriors and the infuriating thing for them was that it was so needless.

In barging into Louis Picamoles' back, off the ball, the hooker was guilty of daftness on a ridiculous scale. His act of indiscipline was seriously expensive.

Montpellier scored within five minutes of Turner disappearing, Galletier picking up at side of a ruck and galloping all the way to the posts for his second try of the night, converted by Francois Steyn.

Worse was to come. When Turner returned to the field he did so while Glasgow were defending their own line. They couldn't hold out.

Montpellier launched a massive maul towards the line and when it came crashing to the floor, referee Matthew Carley ran to the posts. Penalty try and a yellow for Jonny Gray.

Glasgow conceded again while Gray was away. They held out and held out, but eventually buckled and broke. Du Plessis got the touch down that wasn't all that obvious on the television replays but was clear enough to Carley. Steyn added the conversion and Montpellier led 26-17. A fourth try for the visitors. Bonus point time.

All of this was traceable to the one act of daftness from Turner. There was a reply from Glasgow - and it was terrific. When they brought George Horne into the action and upped the tempo, they looked a dangerous side at times, a side capable of undoing the damage they'd done to themselves earlier.

Sarto's second score was pure Glasgow. Penned in their own 22, they broke out with abandon. Russell chipped over the top, Ruaridh Jackson gathered and hit Huw Jones who, on his debut, fled away downfield, eating up the ground before getting his pass away to Sarto. It was an epic score, but one that Russell couldn't convert and Glasgow couldn't build on.

Their line-out had been faltering and now it fell apart completely. They lost six balls on their own throw; a hideous malfunction. Glasgow couldn't get enough ball or enough territory to ask enough questions.

Their discipline wasn't good enough, their control only fleeting. Instead, Montpellier added to their lead with a Steyn penalty with nine minutes left.

That brought it 29-22 to the visitors and that's where it remained. That last whistle brought an end to Glasgow's European hopes, such as they were. For them, huge dejection on the biggest stage. 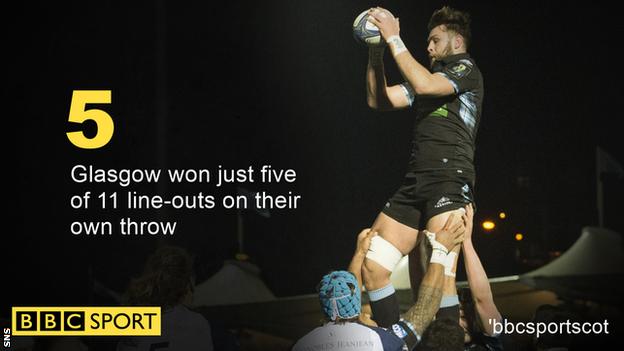